Criticised in many quarters for his demands for turning tracks in the ongoing Test series against England, beleaguered Mahendra Singh Dhoni got unexpected support from visiting team off-spinner Graeme Swann who said there is nothing "strange" about the Indian skipper's request. 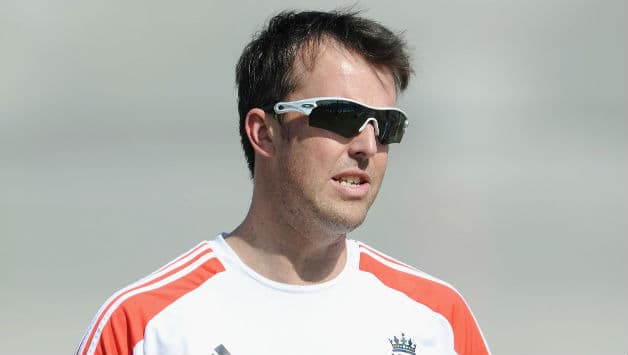 Criticised in many quarters for his demands for turning tracks in the ongoing Test series against England, beleaguered Mahendra Singh Dhoni got unexpected support from visiting team off-spinner Graeme Swann who said there is nothing “strange” about the Indian skipper’s request.

“It is not strange for a home team to ask for a wicket to suit their team. We do that when we play in England because we want it to suit our bowlers. The fact that we have won the last two Tests is a testimony about how well we have played and not a lot to do about the pitch,” Swann said here Tuesday, two days before the start of the fourth and final Test of the series in which the visitors are leading 2-1.

Swann, who has taken 17 wickets from three matches and has complemented left-arm spinner Monty Panesar (16 from 2), also had a lot of praise for the Eden Gardens wicket at Kolkata, venue of the previous Test that India lost by seven wickets and termed it “exceptional”.

“I don’t know if anyone could look at that wicket we just played on and actually call it a rank turner from day one. It was a very good Test wicket and did very little for the spinners or the pacers on the first two days gradually broke as the game went on and was turning quite nicely by the end.

Any obsession with the pitch has been banished by that because Kolkata produced an exceptional Test pitch,” he said.

“I obviously don’t know who is talking about the pitch, whether it is the press. We don’t read the press in the changing room. We have missed out on a lot of that,” he replied when asked whether the talk about rank turners actually played into England’s hands.

He was non-committal about the pitch for the final game at the VCA Stadium here in Jamtha from December 13.

“I don’t know, I haven’t seen the pitch yet. We went straight out to the nets. It doesn’t matter what you believe because the pitch is going to be the pitch. I am sure the management and coach will look at it and they will assess it.

We play on it whatever comes on Thursday. It is normally a good pitch here and I am expecting it to be that,” Swann said.

“Whatever the pitch is, we have to try and win the game. So come Thursday morning it will be about winning the first session something which we have managed to do in the last two Test matches and that is why we have gone on to win the match,” he noted.

Asked to compare India’s situation (1-2 down in the series) to their own against South Africa recently, Swann predicted the hosts would come out with all their guns blazing to square off the rubber here.

“I am sure India will come out actually fighting because they have to win the game. I am sure we will approach the game because attack is our best form of defence and that has been proven in the last game,” he said.

“It is tough (for India) but sometimes it is a good position to be in. If there is only one possible result you can get then you can go all out fighting,” he added.

Asked about the turn-around in the team’s fortunes after the comprehensive nine-wicket defeat to the hosts in the series opener at Ahmedabad, Swann said every team member was told that Mumbai, venue of the next game, was the place to bounce back.

“After losing the game in Ahmedabad and also knowing our previous results in India which is not at all good it is very easy to get into the rut of losing games, travelling around, losing another one and you can’t wait to go home at the end of it rather than focusing on winning the next game. It was made very clear that Mumbai was the chance to level the series and anyone who didn’t see it that way wasn’t sort of welcome in the dressing room.”

Swann also pointed out that England had approached the tour differently this time around.

“It is probably bit different this time around, how we have approached the trip. We have really tried to embrace India and embrace the series. We believe we can win it and I am not sure that has always been the case. I have only been on one Test tour before, but certainly there is more belief in this group right from the outset,” Swann declared.

Swann said that it was because of the number of runs put on board that he and his spin partner Panesar had been able to get among the thick of wickets.

“What I said at the start of the tour is that if you expect just the spinners to win the game for you, you are screwed and I stand by it completely because it is a team effort. Without the monumental performances of Cook, Pietersen and Trott in the last game we would not have been 2-1 up.

“The spinners have taken wickets but you also see the totals we have posted in those games. The crux of it is that if you get 500 in a Test match, you are not losing a match,” he said.

“We have got quite a few players in good form at the moment and they are cashing on it with the bat. If you score big runs in Test cricket you put yourself in with the chance of winning and that is what we have been doing in the last two matches,” he added.

However, Swann maintained that the job is not done yet and England will not take things for granted in the nest match.

“Well we haven’t beaten them in all conditions because we lost the first game in Ahmedabad. We are not taking them for granted. We don’t pat ourselves on the back and say ‘look how well we have played in the last two games’ because that is a very dangerous place to get in.

“Thursday morning we will assess, we will play accordingly and hopefully win the game. We obviously want to go home for Christmas having won the series 3-1. If we win the game it will be a lovely way to round off the year,” he signed off.