Swann has hit out at some media coverage of his retirement announcement .

Retired England spinner Graeme Swann has hit out at some media coverage of his retirement announcement and indicated that he is ‘upset’ at the inference that he criticised former team-mates.

Swann, who is preparing to leave England’s struggling Ashes tour, had described certain players as ‘up their own backsides’ – which some interpreted as a veiled attack on Kevin Pietersen – before subsequently clarifying his comments.

According to the BBC, Swann said that the media has made an ‘ass’ of themselves by assuming to know the truth from rumours, adding that Pietersen and the rest of the England squad are aware of who ‘grinds his gears’ around the world in cricket.

Stating that the press is just looking for chinks in the armoury of English cricket that are not present in reality, Swann further said that it may be because of the current poor state of his soon-to-be former team, who has already lost the urn, adding that everyone assumes that there is rift and anger in the England dressing room now.

However, Swann denied any such occurrences and also expressed his disappointment at the reaction at his homeland, saying that he is very angry at people calling up and upsetting his grandmother, adding that he hopes that those reporters get their comeuppance. owling plans while keeping it simple for the bowlers. 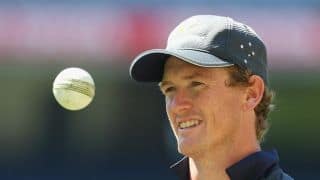