Sri Lanka have already lost the first two Tests and with Shaminda Eranga being reported for suspect bowling action, the visitors' chances of resurgence look bleak.

As Sri Lanka face hosts England for a 3-match Test series, team’s bowling coach Graham Ford has revealed that one of his matters of concern is the need of depth in Sri Lanka’s fast-bowling tank. With their most dependable names for the tour Dhammika Prasad and Dushmantha Chameera being ruled out following their respective injuries, it left them with fewer options to compete against a James Anderson-led England pace squad which did not turn out to be fruitful. Sri Lanka have already lost the first two Tests and with Shaminda Eranga being reported for suspect bowling action, the visitors’ chances of resurgence look bleak. READ: ENG vs SL: Dushmantha Chameera replaced by Chaminda Bandara

Talking to espncricinfo.com, Ford said, “Maybe it’s a little alarming that perhaps we don’t have the depth that we were hoping that we would have at this stage, in the fast bowling department. That’s a project for the future, because there are those injuries around fast bowlers. I did see some exciting Under-19 bowling before we came out here to England. I’m sure there are talented boys and if they’re looked after properly, we should have a decent unit of fast bowlers.”

“It is a challenge, because Dhammika was the star of the show last time Sri Lanka toured England. He was the one that bowls the right length and was able to swing the ball both ways. The rest of the guys tend to swing it out more than anything else. And then we lost that extra pace that Dushmantha brings,” he added.

“From a firepower point of view we are perhaps not where we want to be. But we do have a bowling unit that can bowl with discipline, hit their areas, and find other ways of creating pressure. Champaka has been working very hard with them on that. We’ve had periods where we have created that pressure and stuck to it pretty well. But then we’ve had other periods when we haven’t been like that, which shows that we’re very much a work-in-progress,” Ford concluded. Frank Tyson: 20 facts about the Typhoon who brought The Ashes back 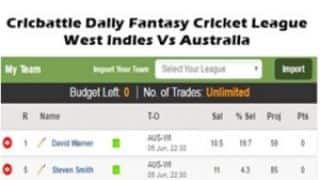