Graham Ford on Saturday said his bowlers have the plans in place to neutralise the threat posed by the marauding Chris Gayle.

Bengaluru: Not too intimidated by the prospect of a Chris Gayle onslaught, Sri Lankan coach Graham Ford on Saturday said his bowlers have the plans in place to neutralise the threat posed by the marauding West Indian batsman in Sunday’s World Twenty20 clash. “Twenty20 is a funny game and all sorts of things can happen. At the same time we need to come up with one or two plans to neutralise the big guns in their side. So we are quietly chatting about a few things and of course the execution of those things is important,” he told reporters on the eve of Sri Lanka-West Indies WT20 match at Chinnaswamy stadium. FULL CRICKET SCORECARD: Sri Lanka vs West Indies, T20 World Cup 2016, Match 21 at Bangalore

Asked what Sri lanka would do to keep Gayle quiet, Ford said the team has been successful in out-witting him in the past. “We have put a few things in place in the past. In fact, we did quite well in 2012 against him. We have to see if that still works against him,” he said. Ford said West Indies is a very tough side, but his team is looking at putting basics in place to win the match. “Obviously they are a very tough side. I think if we do our basics well then we have a chance,” he said. Sri Lanka vs West Indies, T20 World Cup 2016, Match 21 at Bangalore, Preview: Pumped West Indians seek to trounce meek Sri Lanka

Ford said the team haven’t its finalised batting order since it hasn’t got the time to look at the wicket yet. Ford said Dilshan has been superb and his previous knock was a master-class. Asked about the impact of Lasith Malinga’s departure, Ford said the team is missing him. “It is a huge impact. Malinga has struck early for us and done well in the death overs. Finishing the innings is very important for momentum and now we have to find somebody to do that,” he said. 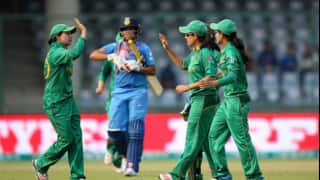