Despite suffering from stomach cramps, Harmanpreet fought through the discomfort and recorded her fourth international century.

Could there have been a better way for India to begin their ICC Women s World T20 campaign than skipper Harmanpreet Kaur slamming India s first ever T20I century in women s cricket? Highly unlikely. Against New Zealand, the 29-year-old belted 103 off 51 deliveries to power India to 194/5 as her side walloped New Zealand by 34 runs in the Women s World T20 opener.

During the innings, Kaur had to battle stomach cramps and receive attention from physio Tracy Fernandes. Yet, Harmanpreet fought through the discomfort and recorded her fourth international century. Add to that the fact that despite struggling with the cramps, Harmanpreet scored seven fours and as many as eight sixes, signifies the steely resolve the India captain possesses.

“Yesterday I was having little bit back problem,” Kaur said during the post-match conference. “In the morning, I was not feeling well, when I came to the ground I was feeling a little low and getting some cramps.

“When initially I was running twos, I got a little cramp, after that the physio gave me medicine, and a little bit it settled down. Then I thought instead of running too much, if I could I get more big shots… because you run too much, you get more cramps. Then I told Jemi (Jemimah Rodrigues), ‘if you give the strike to me, I can go for more big shots’.”

And Jemimah Rodrigues did just that. Besides listening to her captain, the 18-year-old batter involved herself in a record-breaking 134-run partnership with Harmanpreet that helped India pile up the highest ever score in a Women s WT20 match. Rodrigues, who came in to bat after Taniya Bhatia fell for 9 in the second over, scored 59 off 45.

“Jemimah played really well. When you are hitting well, you need someone who can rotate the strike. Credit goes to her, she is very mature. She likes to express herself and never takes any pressure. We need young players who are excited to play international cricket,” the skipper added.

Harmanpreet went on to add that she never focusses much on her personal milestone and rather it was all about getting as many runs as possible. “I was not looking at how many runs I was getting, I was looking at how many we needed to win the game. We knew they have really good batters, they have Sophie Devine and [Suzie] Bates, we knew if we scored just 150, we may not (win the game),” she said.

Harmanpreet added that the addition of coach Ramesh Powar has resulted in a positive influence on the team. Replacing former coach Tushar Arothe in August, the World T20 is Powar s first big assignment following the tour of Sri Lanka and the series against Australia A. “From the time he arrived, our mindset changed and that’s a plus point,” Kaur said. “He has a lot of experience and that is helping us. We are really happy to have him in the team.” Imam-ul-Haq's scans clear, to be under observation 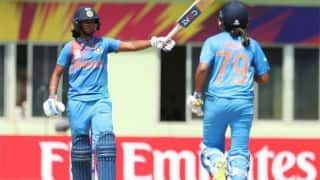