Shivnarine Chanderpaul prevented another complete West Indies collapse on the first day of the first Test here on Thursday as England's Stuart Broad enjoyed yet more success at Lord's. 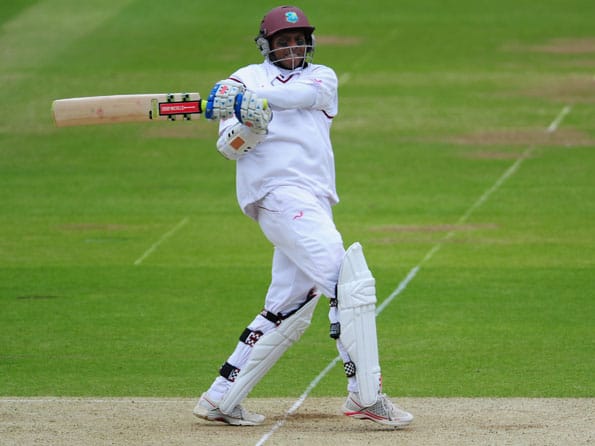 Shivnarine Chanderpaul prevented another complete West Indies collapse on the first day of the first Test here on Thursday as England’s Stuart Broad enjoyed yet more success at Lord’s.

Chanderpaul’s 87 not out, his latest rescue mission for his beleaguered side, was the cornerstone of a total of 243 for nine in an innings where no other batsman has so far made more than opener Adrian Barath’s 42.

It secured him a place on the Lord’s bowling honours board to set alongside his Test-best 169 against Pakistan at the ground in 2010.

And that meant Broad had become only the seventh player in history — and fifth Englishman — to have scored a hundred and taken five or more wickets in an innings in a Test at the ‘home of cricket’.

“It’s a very proud day for me and more importantly we’re in a great position in the Test match,” Broad told Sky Sports.

“No one was expecting 100 all out, we knew it was going to be a long day’s cricket, so we had to be patient and we thought seven down at night would be a really good day, so to have them nine down is really pleasing.

“It swung for us but it was a slow wicket to start with. It was hard to get the right length, but the wicket quickened up a bit in that last session,” added Broad, the son of former England opening batsman Chris.

That Chanderpaul, who came in with West Indies struggling after an all too familiar top order collapse left them 86 for three, led many to wonder why the left-hander, now officially the world’s best Test batsman, had not been promoted from his favoured number five spot.

However, the fact that Thursday also saw former West Indies captain and proven Test opener Chris Gayle, who only recently ended his stand off with Caribbean cricket chiefs, smash 128 not out off just 62 balls in the lucrative Indian Premier League was a reminder of the firepower the tourists were missing.

England did not have things all their own way after captain Andrew Strauss won the toss and fielded in overcast, bowler-friendly conditions.

Unfortunately for the West Indies, Barath — who struck 36 in boundaries alone — had added just one run to his lunch score of 41 when the diminutive opener drove loosely outside off stump against Broad and third slip Anderson held a sharp catch at the second attempt.

Darren Bravo, missed on 29 by second slip Graeme Swann, was run out for that score after a dreadful mix-up with Chanderpaul.

Anderson, bowling round the wicket to Chanderpaul, then saw South African umpire Marais Erasmus raise his finger in answer to an lbw appeal.

Unsurprisingly, Chanderpaul, on 15, called for a review and tracking technology indicated the ball would have missed off-stump.

And 181 for five quickly became 187 for six when wicketkeeper Denesh Ramdin edged Broad to Strauss at first slip.

West Indies captain Darren Sammy, trying to turn a Broad outswinger with the new ball legside, was caught in the gully by Tim Bresnan.

Broad then completed his five-wicket haul all by himself when he caught and bowled Kemar Roach to leave the tourists on 231 for eight.

And the 25-year-old Nottinghamshire all-rounder ended proceedings two balls short of the day’s full 90 overs when he had tailender Fidel Edwards brilliantly caught by diving wicketkeeper Matt Prior.

At that stage, Broad had taken three wickets for 12 runs in 23 balls. (AFP)