Sandhu was the winner of the Steve Waugh Medal as the best New South Wales cricketer last season.

Indian-origin Australian cricketer Gurinder Sandhu has revealed that music and a few games of pool help him chill out and relax when preparing for a match. Cricketers are known for all kinds of quirky rituals when preparing for a match, with Australian legend Steve Waugh carrying a red rag in his pocket while batting or South Africa’s Neil McKenzie taping his cricket bats to the dressing room ceiling before batting.

According to News.com.au, the young Sydney Thunder fast bowler, who was the first male cricketer of Indian origin to represent Australia in the 2012 Under-19 Cricket World Cup, said that instead of any rituals or superstitions, he would simply sit around and listen to music, have a bit of a sleep-in and then have breakfast on a game day.

Sandhu further said that if he has someone with him, then he also may go for a few games of pool, adding that the night before a Sheffield Shield match, he may eat and drink water somewhat more than usual in order to prepare for being on the field for a longer period of time. Sandhu, who put in some head-turning performances during the U-19 World Cup including a hat-trick against Scotland in one of the pool matches, admitted that these measures help him relax and chill out before any match. Sandhu was the winner of the Steve Waugh Medal as the best New South Wales cricketer last season, the report added. 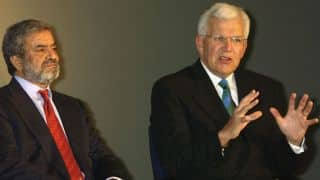