Cameron was the lone candidate until Garner surfaced as a legitimate challenger for the presidential seat.

Georgetown (Guyana):  The Guyana Cricket Board (GCB) will continue to back incumbent Dave Cameron for the president’s post of the West Indies Cricket Board (WICB) despite the challenge posed by former West Indies fast bowler Joel Garner. Garner, who is seeking to unseat Cameron in the March 7 election during WICB’s Annual General Meeting (AGM), is backed by the Barbados Cricket Association (BCA) and was seconded by the Trinidad and Tobago Cricket Board (TTCB), reports CMC.

Cameron was the lone candidate until Garner surfaced as a legitimate challenger for the presidential seat. “Nothing has changed. I mean, at that time he was the only one, but now, nothing has changed and we’ll be supporting him. It should be obvious,” declared GCB secretary Anand Sanasie.

Garner’s running mate is Trinidad and Tobago Cricket Board (TTCB) director Baldath Mahabir while Cameron will have WICB vice-president Emmanuel Nanthan. Cameron has been heavily criticised for the West Indies’ aborted tour of India late last year and calls opposing his re-election have come from the likes of Prime Minister of St. Vincent and the Grenadines Ralph Gonsalves as well as former West Indies fast bowler Andy Roberts.

However, Sanasie says GCB is standing by Cameron based on presentations made to them during a meet here last year. “We met with Cameron when we had our awards ceremony here last year and he made certain proposals which we accepted and are in favour of,” said Sanasie.

Cameron, who was nominated by GCB and was seconded by the Windward Islands Cricket Board of Control (WICBC), is also being supported by Leeward Island Cricket Association (LICA). “I can confirm that LICA will be supporting the incumbent. In fact, our board is nominating the president Dave Cameron and Emmanuel Nanthan for the vice-president,” said LICA chief executive officer (CEO) Derrick Nicholas.

The CEO cites the formation of LICA secretariat in January 2014 as the chief reason behind the association’s endorsement of Cameron to continue his presidency for at least another two-years. 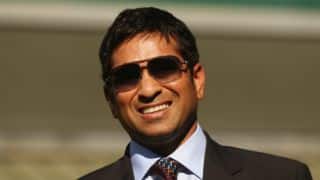