Masakadza has scored 1398 runs in the T20 format in 49 matches for ZImbabwe.

Hamilton Masakadza on Wednesday became the first Zimbabwe player to play 50 T20 internationals for his country. Masakadza who is currently playing in the 3rd T20 or the final T20 game against India of the 3-match T20 series has scored 1398 runs in the format in 49 matches. He has a highest score of 93 not out. His strike-rate is 120.62 and sums up the kind of an aggressive player he is. As a top-order batsman his job has always been to take Zimbabwe off to a flying start and he has succeeded plenty of times in doing so. Aged 32, Masakadza has also been the captain of his side. But recently he was sacked as captain along with Dav Whatmore who the coach of Zimbabwe. LIVE CRICKET SCORECARD: India vs Zimbabwe , Live Score, 3rd T20I Match AT Harare

Masakadza has 10 fifties to his name but has not been able to score a century until now in the T20 format. He made his T20 debut against Bangladesh at Khulna in November 2006. He has not had a good series with the bat so far against India. His poor run-of-form has menat Zimbabwe haven’t been able to capitalize well in the early overs against India who are on tour of Zimbabwe currently.

Grame Cremer was made the stand-in skipper in place of Masadza after the latter was sacked of captaincy duties. Makhaya Ntini was made the interim coach after Dav Whatmore’s sacking. Zimbabwe currently are level with India in the T20 series. The series is tied at 1-1. The ODI series was won by India by 3-0. 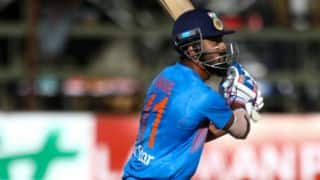