Rutherford and Tom Latham struck crucial knocks to successfully chase the target of 220.

Aug 13, 2014
Hamish Rutherford led New Zealand A to victory in the triangular one-day series with a seven-wicket win over England Lions on Tuesday.
Chasing a rain-revised target of 220 from 36 overs at New Road, Rutherford struck 95 off 84 balls including 10 fours and two sixes before Tom Latham‘s 48 not out saw New Zealand A to victory.
The Lions, England’s second-string side, had defeated Sri Lanka A on Monday. But they struggled in this winner-takes-all clash, and only fifties from Jonny Bairstow and Tom Smith helped them to 255 for eight, after they had collapsed to 89 for five. Ravichandran Ashwin: A complete cricketer who rocketed to prominence 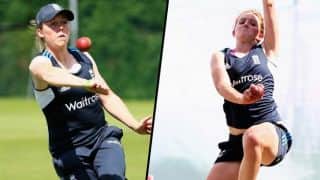