Hanif Mohamad passed away after he protracted battle with lung cancer and other ailments at the age of 81.

Karachi: President Mamnoon Hussain and Prime Minister, Nawaz Sharif led a plethora of tributes for former Pakistan captain Hanif Mohammad who passed away in Karachi on Thursday after a protracted battle with lung cancer and other ailments at the age of 81. “Hanif Mohammad was a icon for all young sportsmen in Pakistan and he played a stellar role in our formative years as a cricket nation,” President Hussain said in a condolence statement. Prime Minister, Nawaz Sharif himself a big cricket fan, said he had always admired the legendary batsman for his exploits and personality. “We have lost a national treasure in the passing away of Hanif Mohammad who ensured Pakistan became a force on cricket’s world map,” he said. READ: Growing up on Hanif Mohammad

“We are all saddened by his death and pray for his family,” he said. The Pakistan Cricket Board, Chairman, Shaharyar Khan, Chairman Executive Committee Najam Sethi and COO Subhan Ahmad also offered their heartfelt condolences to the Mohammad family.

“The entire cricketing fraternity, in this country and all over the cricketing world, is in mourning over the sad demise of Hanif Mohammad. His legend shall live forever,” the PCB said. READ: Pakistan batting great Hanif Mohammad passes away

“I join the Mohammad Family in mourning over the loss of one of the greatest cricketing heroes that this country has produced. His sublime technical skill, his unflappable temperament and his resolve and staying power in all conditions were most remarkable and won plaudits for him and for Pakistan,” Shaharyar said.

Wasim Akram was among a long list of players who were saddened by Hanif’s death. “When I started playing cricket Hanif and Fazal Mahmood were a big inspiration for me as a youngster,” Wasim said. “I was pretty close to Hanif bhai and I can say with certainty he was a great cricket mind and it is because of him and Fazal that Pakistan today is recognized as a top cricket nation,” Wasim said. READ: PCB’s ungrateful behaviour towards Hanif Mohammad epitomises disrepect to legends

Pakistan’s former captain, Javed Miandad said that he was deeply saddened by Hanif’s death as he had spent lot of time discussing the game and learning from the legend. “Cricket unlike other sports is a mind game and Hanif bhai was a fantastic personality in this. A lot of his tips helped me become a top player. Pakistan cricket will always miss him,” Miandad said.

Former captain, Zaheer Abbas said that he had served and played with Hanif Mohammad in the PIA and Pakistan teams and he was a role model for all batsmen. “He was an icon and his batting technique was impeccable and I can only recall with fondness the opportunities I got to see him bat.” Zaheer said had Pakistan not produced superstars like Hanif and Fazal, Pakistan cricket would not have progressed so rapidly.

“His exploits led to many generation of players coming up as he was a icon for us all. Not only as a batsman or wicketkeeper, he understood and read the game inside out.”

Former captain, Mohammad Yousuf said that Hanif bhai had always been a source of inspiration for Pakistani batsmen. “We grew up reading and listening about his batting and cricket exploits. To me Hanif bhai’s 337 in the West Indies is the greatest innings of test cricket. His batting feats are still like a fairytale for us.” READ: Hanif Mohammad or Javed Miandad: Who is the finest batsman in Pakistan’s cricket history?

Former Test spinner, Salahuddin Ahmed who played for many years with Hanif said the former captain was a cricket genius. “His love for cricket was unending and even when he fell ill he would love to call us to his home and talk about cricket,” he said. Former Test captain, Asif Iqbal said that Hanif was cricket’s true superstars in the 50s and 60s.

“To score the longest test innings and then few months later the highest first class innings speaks volumes for his greatness. I am greatly saddened with his demise,” Asif said from London. Hanif’s son, Shoaib himself a Test cricketer said that his father’s funeral would be held on Friday near his residence. “Our family members who live abroad want to attend the funeral. I still can’t believe he is no more with us. I was very close to him and any cricket I played was only because of him. I always wanted to make him feel proud of me,” Shoaib said.

Shoaib also recalled to PTI his father’s admiration for Sunil Gavaskar and Sachin Tendulkar. “I remember vividly that whenever Gavaskar and later Tendulkar were batting he would sit in front of the television and watch them closely and later discuss their finer techniques.” Shoaib said that his father loved visiting India and meeting his old friends and fans.

Cricket historians and players in Pakistan have no doubt that Hanif was the first star of Pakistan cricket who became a household name and celebrity even in the days of cricket commentary on radio.

“I think Hanif deserves credit for turning cricket into a masses sport in Pakistan as with his feats he made sure the game was not just popular with the country’s elite,” PCB’s former chief executive, Arif Abbasi said. 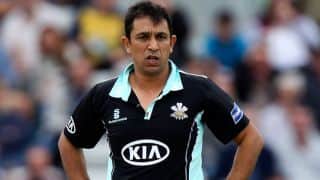