Vihari scored a gutsy 56 under pressure on Test debut, taking India to within 40 of England's score.

Hanuma Vihari impressed all and sundry with a gritty 56 on Test debut, during the fifth Test between India and England at The Oval. India were 103 for 4 on Day Two after England posted 332 when Vihari walked out to join Virat Kohli. And once Ben Stokes removed Kohli and Rishabh Pant in quick succession, Vihari dug deep, adding 77 for the seventh wicket with Ravindra Jadeja. The innings helped India to come within 40 of the English total.

After the day’s play, Vihari credited Kohli in the press conference: “Initially I felt the pressure, to be honest. Going in yesterday, cloudy conditions and Stuart Broad and [James] Anderson bowling at you. I had nerves. With that, I wasn’t good with my decision-making, but having Virat at the other end made my job a little easier, I guess. His inputs helped me initially. He’s been playing very confidently throughout the series and he’s confidence boosted me at the other end. I will give a lot of credit to him for helping me out yesterday initially. But once I settled down, the wicket was very good to bat on, especially with the medium-pacers. It got a lot slower yesterday.

Vihari did not look very comfortable against the incoming ball on Day Two, but he got over that as he settled down. He spoke on the same: “Nerves make you do unusual things. If I don’t have any pressure on me, if I settle down nicely, I don’t think any ball will cause me trouble. Yesterday, I definitely had problems facing the incoming delivery but Virat gave me some cues so that I could play it comfortably. I tried doing that yesterday. And even this morning, I tried to negate that inswinging ball, especially from Broad. I did it more comfortably than in the initial stages.

How did he feel when they told him about his Test debut? “I got to know the day before the match. Obviously, I was very thrilled. Because that was my dream, growing up playing cricket. I first informed my family about it and they were very, very happy as well. Getting a fifty on debut is just the start.”

Vihari also credited India A coach Rahul Dravid for his performance: “I called him the day before I made my debut and told him I was making my debut. He spoke to me for a couple of minutes and gave his inputs and I thought it eased my nerves a little bit, because it is coming from a legend and you know that you belong here. He just told me that you have the skillset, you have the mindset and the temperament, just go out there and enjoy yourself.

“I would like to give him a lot of credit for that because my journey with India A was very important for me to come here, because not only that I performed there, but the way he gave us inputs, that made me a better player.” 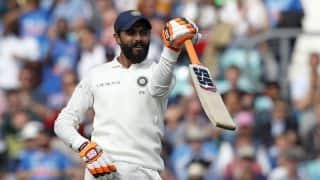