Vihari further said he's learnt a lot from the skipper Kohli and everyone enjoys each other's success in the Team India dressing room.

Hanuma Vihari has taken the IPL snub in his stride and his endeavour now is to do well for India in the upcoming away Test series against New Zealand. A year after he was bought by Delhi Capitals for Rs 2 crore, Vihari, who had kept his base price at Rs 50 lakh, found himself in the unsold bracket. The reason being his inability to force the pace in white-ball cricket as and when required.

“It’s not in my control and I don’t really want to comment on it. My job is to play well and win matches. I have done well for the state team in white-ball cricket. So whenever I get an opportunity, I will do well for the India team as well,” Vihari, who has four half-centuries in T20s and boasts of a strike-rate of 112-plus, quoted by PTI.

Having toured New Zealand in November last year under Ajinkya Rahane-led India A for two first-class games, Vihari is aware of the conditions. He had scored half-centuries in both of his innings (86 and 51 not out) in the first unofficial Test at Mount Maunganui.

“With the conditions being windy, the assistance of swing bowling, it will be a challenge. But everyone has got a good technique in the Indian team and we have done well overseas as a batting unit and looking forward to it,” Vihari said.

A middle-order batsman, Vihari was asked to open only in his third appearance in India’s Boxing Day Test versus Australia as he showed good technique in challenging MCG conditions against the likes of Mitchell Starc, Josh Hazlewood and Pat Cummins before being dismissed by the latter.

With debutant Mayank Agarwal (76) by his side, Vihari saw off the new ball as Cheteshwar Pujara struck a century while skipper Virat Kohli made 82 as India piled 443/7 declared en route to their 137-run victory.

“That was the only match I opened… Whatever opportunity you get at the International level, you have to make sure that you make an impact because of the amount competition,” Vihari said.

The 26-year-old topped the run charts in the tour to West Indies and scored his maiden century (111) in the Kingston Test to guide India to a 2-0 sweep. “You have to be consistent in international cricket to survive at that level. I try to contribute as much as I can for Team India,” he said.

Vihari, who scored 289 runs at an average of 96.33 in the West Indies tour, feels that his international exposure has improved his game vastly. “Although I was consistent but after playing International cricket, my game has improved. That is the only change which I got from domestic cricket.”

Vihari further said he’s learnt a lot from the skipper Kohli and everyone enjoys each other’s success in the Team India dressing room.

“He’s (Kohli) a very determined and committed cricketer and passionate about his game. He always wants the team to be number one and so are we. I learnt a lot from him. 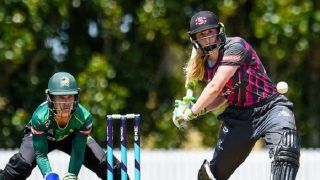