Ajit Agarkar announced retirement from all forms of cricket on 16 October 2013, but he still holds several records for India with both bat and ball.

India’s 2007 T20 World Cup winner Ajit Agarkar turned 42 on Friday. Agarkar is considered as one of the finest white-ball bowlers to ever play for India. The fast-bowler is the third-highest wicket-taker for India in ODI cricket after Anil Kumble and Javagal Srinath. He has picked 288 wickets in 191 games for the Men in Blue. During his playing days, Agarkar was also famous for his handy batting lower-down the order as he has his name on the Lords’ Honour Board for scoring a Test century at the iconic ground against England.

The fast-bowler was also part of India’s 2003 and 2007 ODI World Cup squad. Agarkar announced retirement from all forms of cricket on 16 October 2013, but he still holds several records for India with both bat and ball.

1. Fastest to 50 wickets in ODIs for India

Ajit Agarkar made a big name for himself after he broke the record of fastest-bowler to reach 50-wicket mark in ODIs. Agarkar achieved the feat in just 23 games, which was a record at that time. Currently, he is the second-fastest as Ajantha Mendis of Sri Lanka broke his record in 2008 by picking 50 wickets in just 19 matches.

Ajit Agarkar, who during his childhood days trained to become a batsman, showed his batting capability on several occasions. The Mumbaikar holds the record of fastest 50 in ODIs for India. Agarkar slammed a 21-ball fifty against Zimbabwe in 200, he played a magnificent knock of unbeaten 67 runs in 25 balls as his innings was laced with 7 fours and 4 sixes. He also picked three crucial wickets in the game and guide India to a clinical win. He was adjourned Man of the Match in that game.

During the India tour of England in 2002, the first Test match of the series was played at the iconic Lords. After dismissal performances in first three innings, India were chasing a mammoth total of 568 runs in the fourth innings and the top order-failed again for India as they were 6 down for 170. And then came Ajit Agarkar in the middle. The fast-bowling all-rounder played a magnificent knock off unbeaten 109 runs in 190 balls. Though India lost the match by 170 runs but it is still remembered for Agarkar’s top show with the bat in the fourth innings.

It was the second Test match between Australia and India in 2003 in Adelaide. The match witnessed some masterclass batting performances from Ricky Ponting (242) and Rahul Dravid (233) but it was Agarkar’s magical spell who changed the course of the game. In the second innings of Australia batting, the Mumbaikar picked 6 wickets, which included the crucial one of Ponting, who slammed a double ton in the first innings. India won the game by 4 wickets and it still remains one of India’s best victories Down Under.

Ajit Agarkar was an efficient performer with both ball and bat for India in the 2000s as he knew his responsibilities well and was a trump card for the captain in ODIs. The Mumbaikar holds the record of the fastest player to score 1000 runs and claim 200 wickets in ODIs. Agarkar (133) achieved the feat in 5 fewer matches than South African allrounder Shaun Pollock (138). 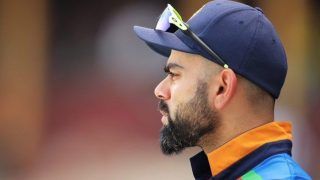