Anil Kumble served for 18 long years and is India's highest wicket-taker in both Tests and ODIs.

Born on October 17, 1970, Anil Kumble turns 46 today. The current head coach of Indian cricket team made his debut in 1990, playing his first Test versus England and maiden One-Day International (ODI) against Sri Lanka. The right arm leg spinner was not a big turner of the ball, unlike his contemporaries like Shane Warne and Muttiah Muralitharan but relied on pace and accuracy for success. Kumble has an astonishing feat of picking ten wickets in an innings in a Test versus Pakistan in Ferozshah Kotla, Delhi. He remains the third highest wicket-taker in Tests with 619 wickets, behind Warne and Muralitharan. Kumble also appointed as India’s Test skipper in 2007 and it was after his captaincy, India became the No. 1 Test side for the first time in world cricket.

Kumble was always an aggressive player and build his reputation in both the formats of the game. Kumble became a regular in ODIs during the early 1990s and ended with 15 scalps in World Cup 1996, which included a six-wicket haul against West Indies. In Titan Cup 1996, Kumble and Javagal Srinath added 52 runs for the last wicket in an ODI against Australia to handover a one-wicket win for the side. He was an integral part of India’s Natwest tri-series (2002) triumph and glorious run enjoyed in ICC Cricket World Cup 2003. Kumble also was a handy lower-order batsman with a solitary hundred in Tests. He scored his only ton against England in 2007.

During his stint as India’s Test skipper, Kumble led the side to a home series win against Pakistan (2007) and a memorable win in Perth during India’s controversial three-Test series against Australia in their den. Kumble is the only leg spinner to have captained his side and he announced his retirement in the middle of the Border-Gavaskar series 2008-09 after which MS Dhoni replaced him as skipper.

Kumble also led Royal Challengers Bangalore (RCB) to the final in the second season of Indian Premier League (IPL) 2009 and was later made mentor of Mumbai Indians (MI) and RCB in the cash rich franchise. Kumble is the fourth Indian cricketer to have his name inducted in the elite International Cricket Council (ICC) Hall of Fame. He was awarded Padma Shri in 2005 whereas in 2012, he was appointed the chairman of ICC’s cricket committee.

An astute thinker, great reader of situations and a fighter on the cricketing field, Kumble served India for 18 long years. He is India’s highest wicket-taker in ODIs and Tests (barring Twenty20 as the format grabbed momentum during the twilight of his career) with 956 wickets. He is only the third spinner and second Indian after Kapil Dev to achieve 400 scalps in Tests and ended bowling 40,850 balls, second only to Muralitharan.

On June 23, 2016, Kumble became India’s head coach after the post remained vacant after Duncan Fletcher’s resignation in 2015. Since he took over, India have won Test series against West Indies and whitewashed New Zealand at home to become the No. 1 Test side, replacing arch-rivals Pakistan. Kumble is expected to take India to new heights as he is a respected figure and active face of Indian cricket even after retirement. 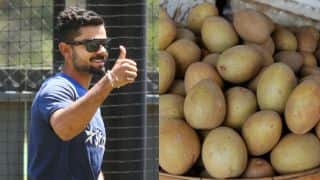 How Virat Kohli got his nickname 'Chikoo'