One of the best fast bowlers in Australia's cricket history, Lillee was known to be a breakthough bowler for captains.

Born July 18, 1949 in Subiaco, Perth, Western Australia, Dennis Lillee turns 67 today. One of the best fast bowlers in Australia’s cricket history, Lillee was known to be a breakthrough bowler for captains. The right-arm fast bowler, bowled at a frightening pace when he arrived at the international arena. Along with his bowling partner Jeff Thomson, the duo became what came to be known as the most fearful pair of bowling. England were often on the receiving end of their wrath. Lillee did lose his pace and energy later on in his career, due to injuries but relied on movement, line and accuracy to pick up wickets. READ: Dennis Lillee: A career in numbers

Lillee made his Test debut for Australia in January 1971 against England at Adelaide. In his Test career he took 355 wickets in 70 matches at an average of 23.92. His best figures were 7 for 83. He had 23 five-wicket hauls and 7 ten-wicket hauls to his names, that shows the immense ability he had to wreak havoc on opposition batsmen. He played his last Test in 1984 against Pakistan at Sydney.

In One-Day Internationals (ODIs), Lillee had 103 wickets in 63 matches. His best figures were 5 for 34. He made his ODI debut in 1972 against England at Manchester and played his ODI against West Indies in June 1983 at the Home of cricket – Lord’s. In First-Class cricket, he has played 198 matches and has a massive 882 wickets to his name. In his List A career he had 165 wickets in 102 matches. There is no doubt as to why he is rated so highly as a fast bowler and one of the best among them in the history of cricket. 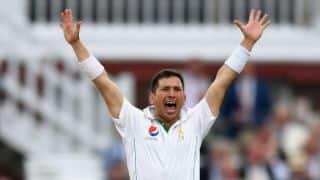