Fernando is known for his unique ability of bowling slower balls by splitting the fingers on the ball when it is released from the hand.

Born on July 19, 1979, Dilhara Fernando turns 37 on Tuesday. Fernando is the fastest bowler produced by Sri Lanka. He was a key member of the Sri Lankan team in the ICC Cricket World Cup in 2007 and 2011, held in West Indies and India, respectively. Fernando is known for his unique ability of bowling slower balls by splitting the fingers on the ball when it is released from the hand. Fernando has three five-wicket hauls in Test matches whereas one in One-Day International (ODI). Since 2012, he has not been a regular in the national side due to injury and emergence of other bowlers in Sri Lanka but was called in the short Twenty20 (T20I) series against India in early 2016. ALSO READ: Sanath Jayasuriya: Selecting Sri Lanka squad against Australia difficult

Fernando made his international debut in the longer format of the game against Pakistan in 2000 whereas his last Test was also against the same team. He made his debut in ODIs versus South Africa and his T20I debut against England in 2006. He was good in patches for Sri Lanka but could not perform upto his potential due to constant injuries and lack of control in his bowling. His best performance came in the World Cup 2007 Super 8 stage against England when he held his nerves to defend 12 runs off the last over against England. He could bat a bit with a high score of 39 in whites. His bowling average stands at 37.84 and 30.20 in Tests and ODIs respectively. ALSO READ: World Cup 2007: The Fernando Finish

Fernando has also played in the Indian Premier League (IPL) for Mumbai Indians in the initial editions of the cash-rich tournament. He was featured in the County cricket for Worcestershire. He is currently playing the Sri Lanka XI team against Australia, ahead of the visitors tour of the Asian country for a three-Test series. He would like to make a comeback for the national team with a good performance in the opportunities he gets ahead. 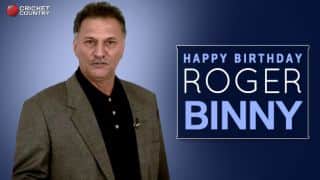