Jason Holder succeeded Denesh Ramdin as the captain of the West Indies ODI and Test team.

West Indies Test and One-Day International (ODI) captain Jason Omar Holder turns 25 on Saturday. Holder, one of West Indies youngest captain, led West Indies to their first Test win in over a year, when his side beat Pakistan by five wickets recently at Sharjah. Holder has represented West Indies in 20 Tests, 45 ODIs and four T20Is. He has picked up 31 Test wickets, 59 ODI wickets and five T20I wickets in his career so far. He also led West Indies in the ICC World Cup 2015, where his side made it to the quarter-final. Holder in the Sharjah Test against Pakistan, picked up his maiden five-wicket haul in Tests. He also has a Test century and a couple of ODI fifties to his name.

Holder is no mug with the bat as well. He has 801 runs in Tests at 28.60 and also 535 ODI runs at 22.29. He has lead West Indies in 24 ODIs and 12 Tests overall. West Indies under Holder are going through a transformational phase. He was appointed captain after veteran Denesh Ramdin was sacked, by the previous chairman of selectors Clive Lloyd. Holder s next assignment will be to lead West Indies in the tri-nation series, hosted by Zimbabwe, featuring Sri Lanka as well. After registering his first Test win as captain, Holder said, This is a very good group of guys. We ve shown glimpses that we can compete, we ve shown glimpses we have what it takes to compete at this level, said Holder.

For us, it s just a matter of consistency. We mustn t get complacent. We have no reason to be complacent. One Test victory, by all means, is not enough. It s a situation where we have to stay hungry, and that s something I really believe we have in the group. Everybody is young, everybody is looking to make their mark on the international circuit, so everybody is hungry for success. And one thing I really enjoy in this dressing room is that everybody is happy for each other s success, he added. 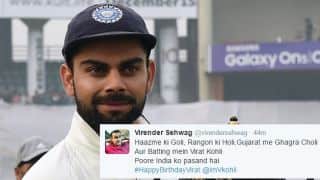