Following brilliant performance for Gujarat, Bumrah made his India debut in Australia, during India s final ODI of 2016.

Born on December 6, 1993, Indian pacer Jasprit Bumrah turns 24 today. Following brilliant performance for Gujarat, Bumrah made his India debut in Australia, during India s final ODI of 2016. He impressed immediately by picking wickets of Steven Smith and James Faulkner. His ability to be accurate, bowl darting yorkers and variations have been India s weapon as they scaled to greater heights in limited-overs cricket. Bumrah got his maiden Test call up for India s upcoming South Africa tour.

His First-Class record is impressive, too, as he has bagged 89 wickets from 26 matches. His numbers have contributed towards his call-up. In List A, Bumrah has 104 wickets from 53 matches and in T20s, he has 127 wickets from 107 matches. He has been the backbone of Mumbai Indians’ (MI) bowling in the recent times.

Bumrah possesses a special ability to remain calm under duress and that is one of the reasons for his success. We wish Bumrah a very happy birthday and a successful career ahead. India 6 wickets away from win against Sri Lanka before lunch, Day 5, 3rd Test 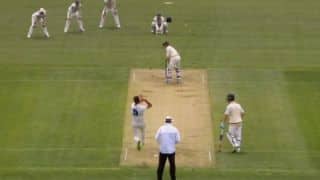