India One-Day International (ODI) and T20I captain MS Dhoni celebrates his 34th birthday today. Dhoni, born on July 7 1981,made his debut as a wicket keeper against Bangladesh at Chittagong in 2004. He would go on to make an immediate impact as he scored as he scored a blistering 148 against Pakistan in his fifth ODI at Vishakapatnam. He impressive performance earned him a spot in the Test side in 2005. READ: MS Dhoni: What makes him such a successful batsman?

After a decent beginning Dhoni made a sensational 148 against Pakistan at Faislabad, but had to wait another four years to score another century, which he did against Sri Lanka at Ahmedabad. Dhoni was handed the captancy for the T20I side in 2007, where he led India to a World Cup triumph in the inaugural ICC T20 World Cup 2007. He was shortly awarded the captaincy of the ODI side, succeeding Rahul Dravid. READ: MS Dhoni: Top 10 innings in international cricket

Dhoni would then go on to lift the ICC Cricket World Cup 2011 at home, thereby becoming the first team to lift the coveted trophy at home, It was also India’s first World Cup win since Kapil Dev led England to a win in 1983. Dhoni would then go on to lead India to a ICC Champions Trophy 2013 in England and therefore became the only Indian captain to win three ICC trophies.READ: MS Dhoni celebrates 5th wedding anniversary with Sakshi Singh Rawat

Dhoni is part of the Chennai Super Kings (CSK) in the Indian Premier League (IPL) where he has led his team to the title twice. He has also had the privilege of winning the Champions League T20 (CLT20). READ: MS Dhoni, AB de Villiers, Brendon McCullum to feature in ABCD 3

Dhoni is married to Sakshi Singh Rawat, his acquaintance for a long time in the year 2010. The couple have a daughter named Ziva. She was born when Dhoni was with the Indian side during their tour of Australia. 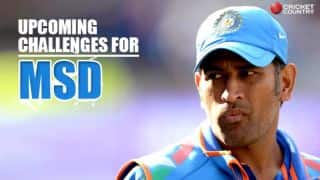 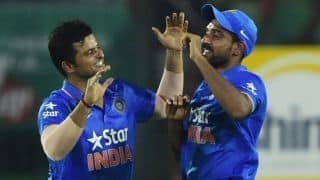