Since his international debut in 2008, Kohli has established himself as one of the best batsmen in international cricket. On his birthday we list 10 facts about Virat Kohli.

Virat Kohli, born on November 5, 1988, is Indian cricket’s latest legend in the making. Since his international debut in 2008, Kohli has established himself as one of the best batsmen in international cricket. On his birthday we list 10 facts about Virat Kohli.

1. Early tragedy: Kohli proved his immense mental toughness early in his cricketing career. As a teenager, in his debut Ranji Trophy season in 2006, an 18-year-old Kohli was unbeaten overnight on 40 for Delhi against Karnataka. The following day, Kohli came out to bat and scored 90. More than the runs he scored, it was the intense personal pain he overcame that was noteworthy; his father had passed away that morning. He went to attend his father’s funeral only after getting out.

2. Early idol: In an interview Kohli gave in 2009, he said his biggest idol was Yuvraj Singh because “He’s pretty stylish and the way he carries himself on and off the field is really impressive.” Ironically, it would be at the cost of Yuvraj’s place that Kohli would get most of his early opportunities.

3. 0th ball: Taking a wicket off the first ball in any format is rare in international cricket. Kohli managed to do something even more exceptional. It was on August 31, 2011, at Old Trafford. Kohli was playing his fourth T20I, but had never bowled in the shortest version of the game. He came in to bowl with 110 needed off 78 balls. The first ball Kohli sent down was wide outside leg stump. Kevin Pietersen (no less!) somehow managed to get out of the crease, and MS Dhoni whipped off the bails. As a result, Kohli took a wicket off his 0th ball in T20Is!

4. Kohli is the youngest player to win the ICC One-Day International Player of the Year Award. He won the award in 2012 when he was only 23 years old.

5. Kohli was at the other end during Tendulkar’s last ODI innings. Playing Pakistan at the Asia Cup 2012 in Dhaka, Kohli and Tendulkar had a 133-run partnership that helped India recover in their run-chase of 330. Tendulkar was dismissed for 52, whereas Kohli went on to score 183 in the match-winning cause. Interestingly, Kohli was the batsman who replaced Tendulkar after he was dismissed during his final Test innings against West Indies in Mumbai. As Tendulkar waved good bye, Kohli waited at the boundary and applauded him before entering the field of play.

6. Team man: For all his apparent brashness, Kohli is an out and out team person. Whenever a teammate gets to a landmark while batting, Kohli is usually the first in line to applaud, and there is unfailingly a big smile on his face. While fielding, he celebrates every wicket whether or not he was a part of the dismissal. In both of Rohit Sharma’s ODI double tons, he and Kohli were involved in run outs that resulted in Kohli’s dismissal. Kohli was furious both times, but he showed obvious delight when Rohit got to his double ton on either occasion. It has also been observed that while fielding in the deep, Kohli frequently asks the Indian section of the crowds who cheer for him to instead start cheering for India.

7.The ‘Fastest’ man: Kohli has scored the fastest as well as the third-fastest ODI centuries by an Indian off 52 and 61 balls respectively. Coincidentally, the two innings came within four matches of each other and in the same series against Australia in 2013.

8. Kohli’s nickname is Cheeku. Former Delhi coach Ajit Chaudhary gave him the name when he joined the Delhi Ranji team.

9. He once revealed that his first crush was Karisma Kapoor 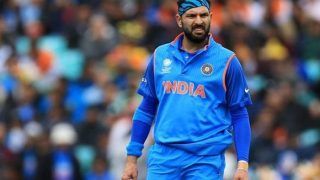 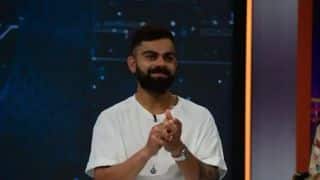 Happy Birthday Virat Kohli: The Most Searched Cricketer Globally in 2019