Mumbai Indians skipper Harbhajan Singh on Saturday praised Lasith Malinga and James Franklin for their "fantastic" performance with the ball and said he was happy that he made the right choices in the Champions League twenty20 semifinal tonight. 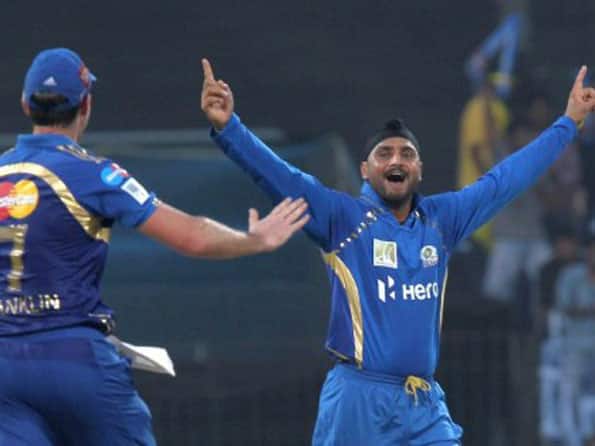 Mumbai Indians skipper Harbhajan Singh on Saturday praised Lasith Malinga and James Franklin for their “fantastic” performance with the ball and said he was happy that he made the right choices in the Champions League twenty20 semifinal tonight.

With Somerset needing 22 off last 12 balls, Harbhajan asked Franklin to ball the second last over and the New Zealander picked up the wickets of Jos Butler (19) and Craig Kieswetter (62) — to turn the game in Mumbai’s favour.

Malinga, who had given Mumbai a brilliant start picking up two quick wickets initially, then completed the proceeding by taking two more wickets in the last over.

“We won the toss and it was a bat-first wicket. This was a better wicket than earlier ones. We got to a total where we could defend. Malinga and Franklin were fantastic in last two overs,” said Harbhajan after MI beat Somerset by 10 runs and set up a summit clash with Royal Challengers Bangalore.

“It is a matter of a wicket or two in this format. When I got the wicket we kept things tight. Most important was the 19th over. Franklin bowled his heart out and set up the match for us. He was the only bowler who was the bowling the right sort of length.

“I think I made the right choice. I had an over left but the batsmen were doing well and this side of the boundary was small as well. So we I am happy that my decision paid off and we got the result we were looking for,” he added.

His counterpart Alfonso Thomas said they were gutted to miss out of an opportunity to make it to the finals but took pride in the way they performed in the tournament.

“It was a fantastic effort by the boys in the tournament. We have just finished pushing a very very top team. Obviously gutted but we have provided some good entertainment. That guy Malinga is a quality performer,” Thomas said.

“Some of the boys will go back as men. We look at someone like Dibble who has come in and done fantastically well. We will take some good memories from here. It was a fantastic experience.”

Man-of-the-Match, Malinga, said he always believed in his ability and used his variations to pick up wickets whenever his team wanted.

“I had to take the wickets. It was important to strike in the start. That was the main thing. I then came back with the old ball and tried to take wickets with my variation,” he said.

“I have to use it at the right time. 19th over went only for few runs. Doesn’t matter any team (in the final) I believe in my ability.”

Franklin, who finished with figures of two for 16 runs in his three overs, said he was happy to live upto the expectation of his skipper Harbhajan, who showed a lot of faith in him.

“I think it was a bit last-minute (decision). Bhajji had faith in me. Good to come on the right side of it. It was Bhajji’s decision,” he said.

“Couple of overs ago, it was supposed to be Pollard.

Malinga is awesome, he is one of the bests pace bowlers in the world.” (PTI)