Harbhajan says he was more surprised than hurt after being axed

Harbhajan says he was more surprised than hurt after being axed

Off-spinner Harbbhajan Singh says he was more surprised than hurt when he was axed from the Indian ODI team for the first two ODIs against England. 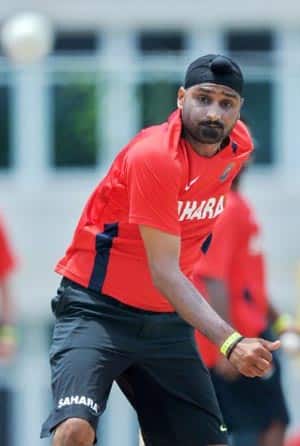 Off-spinner Harbbhajan Singh says he was more surprised than hurt when he was axed from the Indian ODI team for the first two ODIs against England.

“I wouldn’t say I was hurt. I was more surprised. I wish the younger guys all the best. I am more than happy to share my experience with them like I was helped by Sachin Tendulkar, Anil Kumble and Sourav Ganguly while I was coming up,” Harbbhajan told PTI in an interview.

Dropped following a lacklustre tour of England, Harbhajan said that despite not being a part of Indian side, he would like to see his teammates take revenge over England in the five-match series, starting on Friday in Hyderabad.

England recently blanked India 0-4 in the Test series before inflicting a humiliating 0-3 defeat in the five-match one-day series at their backyard.

Harbhajan, on his part had a dismal show, as he took only two wickets in 69.4 overs at an average of 143.50 and economy rate of 4.11 before he suffered a stomach injury during the second game and was ruled out for the rest of the tour.

“Harbhajan Singh is immaterial. What is important is India must beat England in the five-match ODI series and take their revenge, which I am sure they would over the next two weeks,” he said.

“Ultimately, we are all playing for the country. We all are looking to exact revenge against a team who were so good against us recently,” he added.

The feisty spinner also said that India’s defeat in England hurt him more than his own omission and it continues to be a recurring nightmare for him.

“It took a lot of hard work for us to reach to the top. And we wouldn’t rest till we wrest it back. We won’t rest..,” he said.

Critics in recent times have found fault with Harbhajan’s bowling, saying it was not penetrative enough but the bowler begged to differ.

“First of all you must decide what you expect from a bowler in limited overs format. Do you expect him to take a five-for everytime he bowls his 10 overs or do you want him to put the squeeze on and force the opposition to play into your hands?,” asked Harbhajan.

“In a low-scoring match, you would expect him to take wickets. On a belter of a track, you want him to dry up the runs,” he added.

In the 17 ODIs this year, the 31-year-old spinner barely conceded over four runs an over during the tours of South Africa and West Indies and in the World Cup.

“In the Caribbean, I took one for 24 from 10 overs, besides scoring 41 with the bat in Antigua to clinch the one-day series. I must have done something right to have survived for 13 years. Who can be more concerned about my performance than myself?” he said.

“I would do what my team wants me to do. I can’t keep adjusting every time somebody fancies to write about me. All I can say is that I am now completely fit and full of vigour. I am ready to put my best foot forward.”

India turned out to be an inferior side against a rampant England in an away summer but a series of injuries also played a part, including one to Harbhajan in the second Test at Trent Bridge, which skipper Mahendra Singh Dhoni often mentions as the moment when his team completely lost its bearing.

Injuries were also an issue with the IPL side — Mumbai Indians — but unlike the Indian team, it rode over its misfortune and won its maiden Champions League Twenty20 title last Sunday.

Under stand-in-skipper Harbhajan Singh, the Mumbai Indians often came back from hopeless situations, including the one in the finals to emerge victorious.

“It’s fair to say we were underdogs. We lost key players and the balance of the side was skewed. But none of us ever lost belief that we could do it,” said Harbhajan, who led the team in place of regular captain Sachin Tendulkar.

“It’s never easy to captain a T20 side. Every delivery can make you doubt your decision. I decided early to attack at all time. Often, opposition senses the heat and goes to pieces,” said the off-spinner.

Mazhar Majeed has put every player under suspicion: Paul Marsh