Sikh organisations have registered a complaint against Harbhajan in police, and they even plan to go to the Akaal Takht.

Harbhajan Singh has ran into trouble only a few days into his marriage, as a few Sikh organizations have claimed that the guests were served as many as 113 different types of tobacco during his wedding. The 35-year-old Indian spinner tied the knot with his long time girlfriend and Bollywood actress Geeta Basra on October 29, and their wedding reception is slated on Sunday, November 1 in New Delhi. Many eminent personalities across various fields are expected to be present during the wedding reception of Indian cricketer Harbhajan and his actress wife Geeta. To make sure that he is present at his friend’s wedding reception, star India all-rounder Yuvraj Singh has even skipped the fifth round match in Ranji Trophy 2015-16 for Punjab against Andhra. ALSO READ: Yuvraj Singh to marry after Diwali?

According to Aaj Tak, a few Sikh organisations have registered a complaint against Harbhajan in police, and they even plan to go to the Akaal Takht — which is the highest seat of power in the Sikh religion. ALSO READ — Harbhajan Singh’s wedding: Four bouncers held for manhandling

Harbhajan’s wedding has been in news for various reasons. The cameramen who were shooting his wedding’s video were allegedly assaulted by four bouncers present at the venue. They went on a dharna and stopped shooting, which forced the Indian cricketer to apologise on the behalf of the security personnel.

Harbhajan and Geeta dated for as long as five years before they took their relationship to the next level. Their wedding was understandably a star-studded affair, with Sachin Tendulkar and wife Anjali along with Yuvraj Singh being present on the occasion. Several members of the Punjab team in the Ranji Trophy 2015-16 were also there at his wedding. 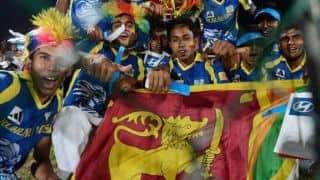