Harbhajan fell in the final of the chase after slamming the fastest half-century for Mumbai Indians in the history of IPL.

Harbhajan fell in the final of the chase after slamming the fastest half-century for Mumbai Indians in the history of IPL. Harbhajan scored 64 runs from 24 balls, studded with six sixes and five boundaries and put up a century stand with Jagadeesha Suchith, raising Mumbai’s hopes of an unlikely win against KXIP. Live Updates: Mumbai Indians (MI) vs Kings XI Punjab (KXIP) IPL 2015 Match 7 at Mumbai

Jagadeesha Suchith remained unbeaten on 30, which came off 24 balls which included four boundaries and two sixes. Suchith did really well to support Harbhajan, as the two batsmen added 100 runs for the sixth wicket.

This was after Mumbai Indians (MI) got off to a horrendous start against Kings XI Punjab (KXIP) in Match 7 of Indian Premier League (IPL) 2015 at Mumbai on Sunday. After Sandeep Sharma struck second ball to have Rohit Sharma LBW for a two-ball duck, Aditya Tare offered a simple chance to Murali Vijay off Anureet Singh.

Aaron Finch then tried to slog his way out of trouble against Mitchell Johnson, and lost his stumps in the process. Corey Anderson was stumped for five off 11 balls as MI sank to 25 for four with a long way to go for a win. 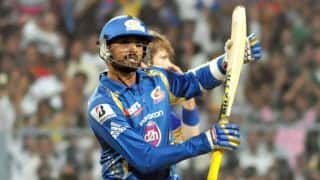