Harbhajan had initially started an academy in Punjab with an aim to rehabilitate victims of substance abuse.

Kolkata: Alarmed by the drug menace among youngsters in the country, out-of-favour India offspinner Harbhajan Singh, who had initially started an academy in Punjab with an aim to rehabilitate victims of substance abuse through cricket, today opened a new centre in Kolkata. This is Harbhajan’s fifth academy in the country.

“One of the reasons to start an academy in Punjab was to de-addict. Many youngsters indulge in drug addiction in Punjab. So the idea is to divert them towards sports,” he said at the launch of the fifth centre of Harbhajan Singh Institute of Academy (HSIS) at the Delhi Public School in Megacity, New Town in the outskirts of the city. 34-year-old spinner said the academy will provide many youngsters an opportunity to learn cricket.

“We’re not here to make money, we’re here to promote cricket. That’s what our agenda is. There’s enough talent in Bengal, India and wherever I go. All we need is to give them is best infrastructure and facilities. Who knows we may produce another Dada (Sourav Ganguly) from here,” he said.

“The motive is to promote cricket. Not everyone is lucky like me. We’ll try not only to teach them cricketing skills but ensure that there is overall development in their personalities,” Harbhajan said. The HSIS has four centres in Punjab, including one in a remote place near Hoshiarpur, and Harbhajan revealed his plans of setting up the biggest academy in Mumbai.

Terming Kolkata as his second home because of several memorable achievements in Eden Gardens, the India’s highest wicket-taking offspinner said the academy would be a source of income for many former Indian cricketers who are jobless.

“Cricket has given me a lot, so it’s my moral duty to give something back to the game. This is not only for me or the kids, this will be a source of income for my cricketer friends as well. There are many former cricketers who are jobless. It will be a good platform for them as well.”

Harbhajan said he would be glad if even five cricketers from his academy could make it to the Indian national team. “If 50 cricketers from these centres go on to represent their respective states and five make India cut, then it would be a success. “I’ll also visit them pretty often as per our programme.

There will be other sports activities also,” said Harbhajan. Asked if he now sees himself as a cricketer-turned-coach, the bowler said: “No not at all. I am still playing active cricket. I will think about it after 4-5 years. I’ve still not thought about it whether I would get into coaching or something else.” 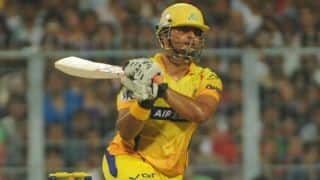