"There is no dearth of talent in Punjab, says Harbhajan Singh

Harbhajan Singh launched a cricket academy for Mahesh Inder Singh Sodhi and his son Reetinder Singh Sodhi at Togan village near Mullanpur. Harbhajan was surrounded by young fans and talked about the need for academy to encourage kids to play outdoor games.

These days, very few kids are coming out to play outdoor games. We need to encourage them and we have to create better infrastructure. In Punjab, sports infrastructure is lacking. We need more academies like these to come up. These facilities can be in the government or the private sector. From government side too, something has to be done so that more and more kids are encouraged to play. There is no dearth of talent in Punjab, Harbhajan said while addressing to the media.

Former Indian all-rounder Reetinder Sodhi, who was a part of the ICC U-19 World Cup in 2000 when India lifted the cup, expressed hope that youngsters will benefit from his experience. He also spoke about the players which his father has coached, of which one is the current young spinner and purple cap holder from Mumbai, Mayank Markande. My father Mahesh Inder Singh started his academy in Patiala in 1999. He has coached cricketers like Jeewanjot Singh and Mayank Markande. He wanted to train youngsters in this region and we hope more national and international level cricketers will come from this city, he said.

Harbhajan who has been like a family member to Mumbai Indians(MI) was bagged by the Chennai Super Kings(CSK) in this years VIVO IPL 2018 auction. Talking about the league Harbhajan was seen confident about CSK lifting the cup this year and that a lot of young talent will be seen in IPL.

Hopefully, we can lift the trophy for Super Kings. I am looking forward to playing for Chennai Super Kings. We have played two matches and I will try to contribute for Chennai Supers Kings as I did for Mumbai Indians in the past. IPL is all about bringing the talent out. A lot of talent has come up, not for India, but even for other counties as well. So it is a great platform. We will see a lot of U-19 players and they will do well in the years to come, Harbhajan said. 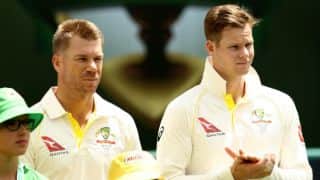