Rajasthan Royals captain Rahul Dravid on Sunday said that Mumbai Indians off-spinner Harbhajan Singh's three-wicket burst in the 17th over turned the Champions League Twenty20 (CLT20) 2013 final on its head and his side lost the plot after that. 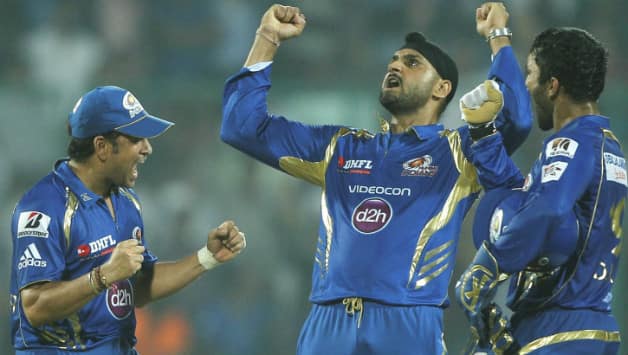 Harbhajan Singh (centre) took three wickets in the 17th over of Rajasthan Royals’ innings in the CLT20 2013 final. In all he took four wickets as Mumbai Indians won the match © PTI

Rajasthan Royals captain Rahul Dravid on Sunday said that Mumbai Indians off-spinner Harbhajan Singh‘s three-wicket burst in the 17th over turned the Champions League Twenty20 (CLT20) 2013 final on its head and his side lost the plot after that.

“Mumbai were the better side. But it was a terrific effort from our team. It was a close game till the end and otherwise a great final,” he said after Rajasthan lost the summit clash by 33 runs.

“But Harbhajan Singh’s three wickets in an over (17th) turned the match on its head and we lost the game there,” said Dravid who has already announced that this would be his last T20 game.

He thanked the players of both the teams and the Feroz Shah Kotla crowd for giving him a warm farewell when he was out for one.

“It was an emotional moment and I thank the players of both teams and the crowd for the warm farewell given to me,” he said.

Winning captain Rohit Sharma said it was a befitting farewell for Sachin Tendulkar who would also be not playing T20 format again.

“It was a nerve-biting game. I would like to thank Sachin and Dravid for what they’ve done for Indian cricket. We are happy for Tendulkar that we won the title and he will not be playing T20 again,” he said.

“We thought the dew would come in. Glenn Maxwell finished off really well. We held our nerve in the end. Winning this was like the icing on the cake after becoming the Indian Premier League (IPL) champions.”

Man of the Match Harbhajan Singh said his figures of four for 32 was one of the best in recent times.

“Great feeling winning two cups in one year. It was a little easier to score with the new ball. The ball was getting a bit wet. That over I took three wickets was probably the best I’ve bowled the last three months. I didn’t practice much before this series, I was traveling to the US,” he said.

Mumbai’s Dwayne Smith was adjudged Man of the Series while Rajasthan’s Ajinkya Rahane won the Golden Bat for his 288 runs.

The Golden Wicket went to the 41-year-old Royals leg-spinner Pravin Tambe for his 12 wickets.

Zaheer Khan: Reaching the end of a roller-coaster career