After earning all the plaudits in a gruelling first session of Day Two, Cheteshwar Pujara fell off the first ball post lunch. His dismissal reduced India to 92 for 7, who resumed at 76 for 4. However, Hardik Pandya led India’s counterattack in style with an unbeaten 81 (off 68 balls). He has added 93* runs for the eighth wicket with Bhuvneshwar Kumar. India have reduced the deficit versus South Africa to 101 runs.

Vernon Philander removed Pujara off the first ball of second session. It was a nothing shot as Pujara poked one outside off stump, and Faf du Plessis flew to his right to pluck a ‘match-changing’ catch. Pujara’s dismissal shook the batting line-up. Ravichandran Ashwin and Wriddhiman Saha followed suit.

Ashwin edged one well outside off stump, irking skipper Virat Kohli in the dressing room. Saha, on the other hand, offered no shot to a reverse-swing off Dale Steyn. It pitched in-line, and the ball decked back in sharply to deceive the Indian wicketkeeper.

Note: Quinton de Kock dives 3.02 meters on his right to take the catch.

Saha’s wicket was a replica off his dismissal from his maiden Test also against Steyn.

Pandya and Bhuvneshwar had a job in hand. Pandya, by then, had survived a review and was also given a reprieve courtesy Dean Elgar. Nonetheless, the half-chances didn’t deter the all-rounder. He continued to play his natural game, played on the up to keep the scoreboard moving. The feature of his innings, so far, has been the flick off Philander. He danced down the track to negate all sort of movement and timed the shot through midwicket.

While Bhuvneshwar took 34 deliveries to open his account, he gave ample support by showing resistance. He played and missed on a few occasions, but reworked his approach.

Pandya carried an I-give-a-damn approach. He knew there would be minimal poor deliveries against a fiery South African attack, and led the revival. He kept strike, played according to the field and discussed about the shine of the red cherry with his partner regularly. The duo grew in confidence and was evident from their shot selection. Bhuvneshwar’s drives met the middle of the blade, and Pandya’s timing was top notch.

Note: Pandya played an upper cut changing the bat angle slightly to keep it squarer from the thirdman fielder.

As a result of Pandya-Bhuvneshwar’s unbeaten partnership second highest eighth wicket stand for India in South Africa India are still breathing in the first Test at Cape Town. South Africa still have their nose ahead, in terms of earning a vital first-innings lead, but India haven’t given up.

If Pandya scores a century, it will be his second First-Class ton (even the first was in a Test). 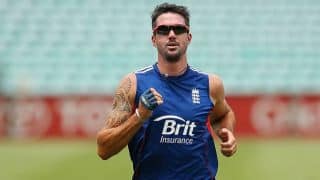