Hardik Pandya has found trouble for himself following his controversial tweet on Dr Bhim Rao Ambedkar.

Hardik Pandya seems to be in trouble after his controversial tweet on Dr Bhim Rao Ambedkar. A report from The Times of India states that a special SC/ST court directed the police to register an FIR against the Pandya on Wednesday. Pandya had allegedly posted a comment on his Twitter account on December 26, 2017, that hurt the sentiment of many. Ambedkar, principal architect of Constitution of India, was a scholar, politician and social reformer, and has inspired many. The tweet read: Which Ambedkar ??? The one who drafted a cross law and constitution or the one who spread the disease called reservation in the country.

DR Meghwal is a member of Rashtriya Bhim Sena in Rajasthan and his complain states that Pandya has shown disregard to the Indian constitution and also hurt the sentiments of a section, who fall under the reservations.

I learnt about Pandya s comment through social media in January. It appeared quite derogatory for a figure like Ambedkar and was an attempt to spread hatred and create division in the society. By doing so, he has committed a serious crime and hurt the sentiments of my entire community, Meghwal, an advocate by profession, was quoted by TOI. He hopes for an appropriate punishment to be meted out to the Baroda cricketer. 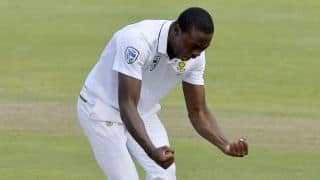