Hardik Pandya contributed with both bat and ball in the first T20I of the two-match series. He picked up a wicket and scored 24 runs off just 12 balls

Malahide: Hardik Pandya started his stint as the captain of the Indian team with a remarkable 7-wicket win over Ireland in a rain-affected T20I match at Malahide Cricket Club on Sunday. The star all-rounder also created a unique record as the captain of Team India in the match.

Hardik Pandya contributed with both bat and ball in the first T20I of the two-match series. He picked up a wicket and scored 24 runs off just 12 balls with a strike rate of 200. India comfortably defeated the home side due to the sublime captaincy of Hardik Pandya.

The match started almost at the midnight according to India Standard Time due to heavy rain in Malahide. Harry Tector’s counter-attacking 64 not out off 33 balls took Ireland to 108 for four after the rain reduced the game to 12 overs a side. India were always ahead of the run rate in the chase and with contributions from Ishan Kishan (26 off 11), Deepak Hooda (47 not out off 29) and Hardik Pandya, cruised to victory in 9.2 overs.

Hardik Pandya became the first Indian men’s team captain to take a wicket in the T20I cricket. The all-rounder achieved the feat when he dismissed Ireland’s opener Paul Stirling in the second over of the match.

He also became only the eighth player to lead the Indian men’s cricket team in T20I cricket. The Indian captain will look to continue his good performances in the second match of the series as well.

“Great to start the series with a win, fortunate we got a game. It is important for our team to start with a win,” Hardik Pandya said after winning the match against the gritty home side.

India will play the second and final T20I match against Ireland Tuesday. The visiting team is in good form and will look to perform well in the second match as well. 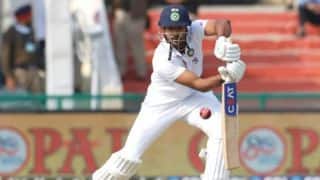