Selectors did spring a surprise here, as nobody expected Hardik to make the cut.

When the selectors sat down to pick the Indian team for upcoming home Test series against England, the focus was expected solely to be on spin expected to be India s major weapon against the tourists. And as per the speculations, selectors did beef up the spin department by naming four spinners in the 15-man squad. However, what stole the show was naming of uncapped fast-bowling all-rounder Hardik Pandya in the squad, which has potentially put him in the line to become the first Indian cricketer to make his debut in all the three formats of the game in the same year; his first in international cricket.

Selectors did spring a surprise here, as nobody expected Hardik to make the cut. He made his T20I debut in January this year against Australia Down Under and then went on to play plenty of games in the format till the ICC World T20 2016. Last month, he made a spectacular ODI debut against New Zealand where he earned a Man-of-the-Match award. However, his selection in the Test squad did not happen only on the basis of his performances in the limited-overs cricket. The selectors were keeping a watchful eye on him even during the A tour in Australia this year, where he performed well.

Speaking on his selection, chief selector MSK Prasad said: “Pandya is an exciting cricketer. We have observed him closely during the India ‘A’ tour of Australia recently and then the NZ one-day series. He has not only improved as a bowler, but also as a batsman. Add to it, he is an excellent fielder and looks a very composed cricketer. We have decided to groom him for all formats.”

The Chairman of selectors even went on to say that Hardik has been given preference over Stuart Binny, who was being tried as an all-rounder for a while but could not quite seal the spot. Hardik being a better bowler than Binny, and an equally good batsman, was considered to be a better prospect for the role and hence the selectors have decided to groom him.

Meanwhile, after being picked in the Test squad for the first time, an elated Hardik spoke to mid-day after his Test selection. “Playing T20Is and ODIs for the country made me feel very proud, but every cricketer’s dream is to represent India in Tests. It can’t get any bigger than playing for India in whites. I am just trying to absorb the news and stay grounded,” the Baroda-all-rounder said. When being asked whether he was expecting a call-up, he said, My performance against NZ in the ODIs gave me a lot of confidence so I’d be lying if I said I was not expecting it. But honestly, I am a bit surprised too.

“When people appreciate your performance, it is an added responsibility because you want to live up to those expectations every time you walk out on the field. And when you are representing your country, that responsibility is even bigger,” added Hardik, whose family has been rejoicing the news ever since it came out. “I wasn’t expecting it, but I was praying,” the same report quoted his elder brother Krunal, who plays for Baroda in domestic cricket and Mumbai Indians in the IPL, as saying. “I saw the news on Twitter and rushed to tell my parents (Nalini and Himanshu). We are looking forward to watching him play Test cricket,” said Krunal.

For now, looking at the team composition, where India would look to play three spinners and just one frontline seamer, Hardik s inclusion in the playing XI looks imminent. We will have to wait for November 9, when India take on England in the first Test at Rajkot. 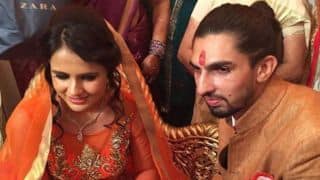