Hardik Pandya started the tour well with a fine 93 at Cape Town in the first Test but faltered with the bat from thereon.

Hardik Pandya has been touted by some as the ‘next Kapil Dev‘. Pandya has definitely shown enough spark with bat and on the field fielding to draw comparisons, but at the moment talking about them at the same breath is premature. Kapil has often lauded Pandya in the past. However, Pandya had an ordinary tour of South Africa: he had started the tour well with a dazzling 93 at Cape Town in the first Test but faltered with the bat from thereon. Kapil now wants him to work on his batting, his primary skill: “He has shown the glimpse. He has the talent and the ability. Comparing with anyone put more pressure on him. I would like to see him go and express himself, enjoy himself”, Kapil told PTI in an exclusive interview on the sidelines of the Laureus World Sports Award at Monaco.

For Kapil, any all-rounder should be strong in one of the two skill sets and he reckons Pandya as a batting all-rounder.

“I would like to see him in the team for one reason, definitely either as a bowler or as batsman. He has to work little harder on his batting because he is a batsman all-rounder. If he can perform a little more with the bat, the bowling will come easy to him and that s what happens to all-rounders.”

Kapil added that Pandya is still very young and everyone is burdening him with too much expectation: “We have started expecting too much from him soon but I think he has the ability and is one of the finest athletes in the team. But he has to work harder to achieve success as an all-rounder.”

India need a mix of Kohli and Dhoni’s attributes

Can India lift the 2019 World Cup Trophy? Kapil feels that the side will need Virat Kohli’s aggression and MS Dhoni’s calmness to replicate his 1983 feat: “If you can have the combination there is nothing wrong because you need to have somebody on the field who is calm and quiet and also understand the game and somebody who is very aggressive … But if everybody is very aggressive, then it’s difficult. And again if everyone is calm, then also it is difficult. So if you can have a combination of both aggression and calmness, I think it will help the team.”

Kapil added that India played terrific cricket to bounce back in the limited overs series after a disappointing outing in the first two Tests in South Africa: “They could have done better in the Test series but they ended really well. They won hands down in the shorter formats in South Africa, which we never did in the past. It was outstanding display. Had they played the first two Tests, a little better it could have been a different story altogether.”

“Virat was brilliant but I think the wrist-spinners have really done a great job. Just a year back [Ravindra] Jadeja and [Ravichandran] Ashwin, two top-class cricketers, were there, but now they are not getting a chance and that shows the depth of Indian cricket at the moment.

“It s amazing how despite some top cricketers like Sachin, Rahul, Sehwag, Laxman retiring in the last 5-6 years, this Indian team has bounced back so quickly and that s a good sign for Indian cricket”, Kapil added.

Kapil believes India under Kohli’s guidance can do well in England and Australia: “His character shows that he believes he can do it but for that he has to work very hard. As a captain, you have to take the team along with you and if he can do it, there is no reason why India cannot win in England and Australia. I have no doubt this team can do that but they have to work very hard.” Norman Callaway: The man with the highest First-Class batting average 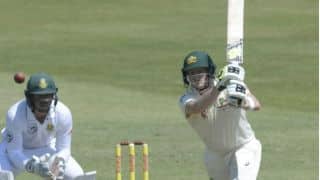