Pandya, who has been making steady recovery since undergoing back surgery a few months ago, reportedly did not meet the permissible score. Allrounder Hardik Pandya has been pulled out of India A‘s tour of New Zealand having failed to pass the mandatory fitness. The team was supposed to leave for New Zealand on Saturday but Pandya, who has been making steady recovery since undergoing back surgery a few months ago, reportedly did not meet the permissible score and will be replaced by Vijay Shankar in the squad.

The development is a setback for Pandya, who was eyeing the series against New Zealand to return to international cricket. It has been learnt that he failed to clear a couple of tests suggesting he is far from ready to return to international cricket. Unlike the senior team, A team, which Pandya was a part of, do not conduct the mandatory Yo-Yo Test, which all the more puts Pandya’s participation for the New Zealand series under the scanner.

Had picked, this would have been Pandya’s first competitive game in any form since suffering the injury back in September. The selectors decided to rest him from Ranji Trophy and instead, pitted him to be part of the A team which is scheduled to play three unofficial one-day games and two Tests.

Not too long ago, Pandya had posted videos of rehab, where he was seen striking the ball well and making good progress. His Mumbai Indians coach Mahela Jayawardene was equally confident of Pandya being fit in time for the series against New Zealand. However, this may further delay Pandya’s return considering India finish the tour on March 4 before hosting South Africa for three ODIs.

Tamil Nadu captain Shankar has been drafted into the India A team and he has already boarded the flight to New Zealand where they will play two 50-over warm-up games, three List A games and two four-day ‘Tests’ against the home A team. With the India A team’s shadow tour coinciding with the seniors’ visit, it gives the selectors an option to draft players on SOS basis if the need arises. 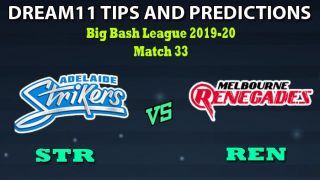