Mumbai Indians (MI), who need to win 2 out of their remaining 3 matches in order to qualify for playoffs, will be clashing with the struggling Kings XI Punjab.

All-rounder Hardik Pandya, who has been left out by Mumbai Indians (MI) from their playing eleven, should be hurt by his exclusion from the side, says cricket commentator and expert Harsha Bhogle. Mumbai Indians (MI), who need to win 2 out of their remaining 3 matches in order to qualify for the Indian Premier League (IPL) 2016 playoffs, will be clashing with the struggling Kings XI Punjab (KXIP) team on Friday night in the 43rd match of the ongoing ninth edition of IPL. Mumbai Indians (MI) are at the fifth spot in the IPL 2016 Points Table, having won 6 out of 11 matches and 5 games lost. Full Cricket Scorecard: Mumbai Indians vs Kings XI Punjab, IPL 2016 Match 43 at Visakhapatnam

Bhogle wrote in his column for Times of India that Pandya cannot be left out of the team for long. He wrote, “For all the fluctuations in their results, MI have actually been remarkably stable in their line-up. The three quick bowlers have complemented each other well given that when you bowl the difficult overs, one could have a bad day and young Krunal Pandya has been one of the revelations of the tournament.”

“I expect his brother Hardik to come back at some point because he has too many things going for him to stay away for too long. Maybe he’s been given time to feel the pain of being left out because it hurts like few things hurt,” Bhogle added. ALSO READ: What SRH, GL, RCB, KKR, others must do to qualify for playoffs

He wondered at Mumbai Indians’ trait of running into tricky situations, as the team picks up the momentum only late in the tournament as seen in the previous editions. He wrote, “The Mumbai Indians are in familiar territory. The fans are on the edge and the team is readying itself for its customary charge to the finish line. I don’t know why it has to be so, but it makes following them extremely captivating.”

He continued, “They need to win two out of three, but have a good game coming up. It is never easy to take the field when you are aware that your chances of qualification are gone and so Mumbai Indians will be hoping they take on, maybe, a dispirited Kings XI.”

Bhogle highlighted that Mumbai Indians (MI) have the worst Net Run Rate (NRR) among all teams, and this is something which they should address. “Mumbai’s win over RCB was fashioned, as is happening so often in the tournament, by the bowlers and it meant that the target wasn’t threatening. Better still, they got there without a powerful performance from Rohit Sharma who has been their talisman.”

“They needed Buttler and Pollard to finish a game the way they did because those two in form are frightening. Against Kings XI though, they need more than just a win because their result against the Sunrisers will haunt them for a while. Of the teams in contention, MI have the poorest net run rate and while it is something they hope won’t come into question, they have to address it,” he explained.

However, the commentator, who was barred from coverage of IPL 2016, says Mumbai Indians (MI) need to watch out for Kings XI Punjab’s firepower. “Much will depend though on how Kings XI face their current situation. Four is a lot of games to play when you know you can’t qualify and they can either just turn up or play spoilers. Watch their body language closely for that will be a giveaway,” he concluded. 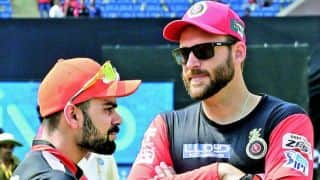