Hardik Pandya who was included in the T20 squad for India against Australia, smashed 39 runs in an over against Delhi in Syed Mushtaq Ali Trophy 2015-16.

Hardik Pandya, smashed 34 runs in an over for Baroda against Delhi in the final Group C of the Syed Mushtaq Ali domestic Twenty20 tournament. Pandya an all-rounder hit medium-pacer Akash Sudan in every corner of the ground, managed to concede 39 runs in that very over to achieve a record for the most runs. Delhi did manage to gain a five-wicket win over Baroda, even as the penultimate over went for more plenty to get to a total of 153. Pandya hit five sixes and one four against Sudan, who found it hard to deal with death bowling and understanding the T20 style batting. Full updates: Syed Mushtaq Ali Trophy 2015-16

Sudan before the on-slaught only gave away eight runs in his three overs with two wickets in his kitty.Pandya would feel good about his innings as it coincides with his inclusion in the Indian T20 team for Australia. Sudan was playing only his second match for Delhi, was given the responsibility of 19th over got hit over long-on the first ball. Second ball went for four byes, third ball which was a slower ball, Pandya hoisted it over cow corner for a six. Fourth ball was a no-ball which Pandya dispatched over mid-wicket for another six, which was covered by a four in the next ball and fifth delivery went for a huge six over long-on. ALSO READ: VVS Laxman lauds inclusion of Yuvraj Singh, Ashish Nehra, Hardik Pandya in T20Is for Australia tour of 2015-16

The final delivery which was dug in short, Pandya managed to connect it well and hit it over six to make it the most runs ever in an over in T20 cricket. The previous record 38,was set by New Zealand’s Scott Styris in  2012. Pandya’s big-hitting ability came into knowing during  the Indian Premier League, when the champions Mumbai Indians used him as one of their finishers in 2015. He is also the fifth-highest run-getter in Syed Mushtaq Ali tournament.

“We were 60 for 6 after 12 overs. Then our score was 93 after 18 overs. I had to target him [Sudan]. I was not expecting to get nearly 40 runs,” Pandya said in an interview to ESPNcricinfo. “My expectation was to get a couple of sixes. I just went with the flow.” Pandya was not shy in admitting this was his best in Twenty20 in an over. “I guess it is a record in domestic T20,” he added. Syed Mushtaq Ali trophy 2015-16: Baroda earn hard-fought 9-run win over Railways

Delhi thus finished the group league engagements with full 24 points from six games while Baroda despite the loss made it to the last eight with 20 points.Delhi’s coach,Vijay Dahiya praised Pandya for backing himself and putting pressure on Sudan. “He was fantastic and put pressure on Akash every ball and came out on top every ball.” 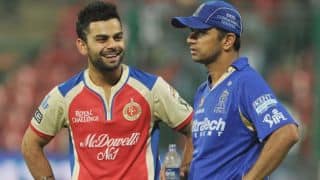 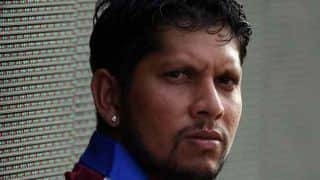