Both Pandya and Jasprit Bumrah had hired the services of Delhi Capitals trainer Rajnikanth Sivagnanam to undergo rehab post their injuries. With an aim to make a comeback to the national squad, India all-rounder Hardik Pandya will be heading to the National Cricket Academy (NCA) to start his rehabilitation programme under the watchful eyes of NCA head Rahul Dravid and his team of trainers from Tuesday.

Pandya was asked by the Indian team management to complete his rehab at the NCA. The 26-year-old was seen in action when he went to train with the team ahead of the opening ODI against Australia at the Wankhede Stadium, Mumbai.

A source close to the team management said that the all-rounder was asked to complete his rehab at the NCA and it will be 15-20 day programme approximately.

“The team management spoke to him when he trained with Virat Kohli and boys on the eve of the opening ODI against Australia at the Wankhede Stadium and he has been asked to start the training from Tuesday. It should be ideally a two-week programme after which he will be ready for international cricket,” the source was quoted by IANS.

Both Pandya and Jasprit Bumrah had hired the services of Delhi Capitals trainer Rajnikanth Sivagnanam to undergo rehab post their injuries. But the Board of Control for Cricket in India (BCCI) president Sourav Ganguly made it clear that all players must report to the NCA to undergo rehab.

“I met Dravid yesterday, and we have put a system in place. The bowlers will have to go to the NCA. If anybody (else) has to treat them, they will have to come to NCA,” Ganguly had said.

“Whatever may be the reason, we will accommodate everything. We will also make sure the players are comfortable and they don’t feel left out or out of place. So, we will do it that way.

“We are going full throttle with the NCA. Construction work will start (at the new land) and it will be a state-of-the-art unit. In 18 months’ time, if we are still there, you will see an NCA that will be spick and span.” 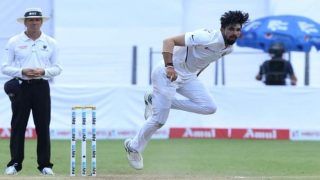