It is you vs me. Your entire team vs me. Bring reinforcements if needed. You have won the World Cup six times, you tell me? Come on, try to stop me today.

In the backdrop of Derby and against the six-time champions, Harmanpreet Kaur‘s iron-willed 171* painted a delirious victory for India, as they embark into the final of 2017 Women’s World Cup. Alex Blackwell’s 56-ball 90 almost trumped Harmanpreet’s heroics, but Australia fell agonisingly short by 36 runs in a rain-affected, 42-over match. India now will take on England, at Lord’s on Sunday, in a quest of their maiden World Cup trophy.

Nothing, absolutely nothing moved Harmanpreet.

Smriti Mandhana out? Never mind. That youngster has done her bit. Punam Raut in the pavilion? It is okay. She scored a century against Australia in the league game. Mithali Raj adds only 36? I know that. How long will she keep toiling for the team single-handedly?

It is you vs me. Your entire team vs me. Bring reinforcements if needed. You have won the World Cup six times, you tell me? Come on, try to stop me today. Let us begin.

Full outside off, and Harmanpreet gets on one knee to execute a cover-drive. Toss one up, and she dances down the track to send one down town. Full-toss, and she whips it over deep square-leg.

Challenge accepted. Harmanpreet dissects the narrowest of gaps. That ball swooshes past the fielders. Neither does anyone dive nor do they bother to to run behind it. She toys with them further. Without giving a hint as to where she will manoeuvre it next, she clears the off-side without anyone realising. When did the ball reach the boundary line? Did time freeze? How did the ball travel there?

Such was Harmanpreet’s innings that it made the Australians squander. Ellyse Perry bowled wides. Meg Lanning ran out of options, so she gave 95th-ranked Elyse Villani the 39th over. She conceded 19. Jess Jonassen ended up leaking 9 an over. No one had respite.

Harmanpreet converted her 10th fifty into her third hundred and second in World Cup. She then went past Mithali, registering India’s highest score in World Cup. She then brought her third fifty in 17 balls, becoming the first Indian to score 150 in World Cup. Across genders, she became only the third Indian to score hundred in a World Cup knockout match, but let me tell you that Sourav Ganguly attained that against Kenya and Rohit Sharma against Bangladesh. This 28-year-old girl did it against Australia, the mightiest team in women’s cricket.

India smote 133 runs in the last 11 overs, setting a frightening 282-run target for the Australians.

Australia’s misery continued. Shikha Pandey cleaned up Beth Money in the second over. In came the dangerous Meg. She can turn the game on its head. She had done in the round-robin stage. Get her, and the job is half done.

Jhulan Goswami, the highest wicket-taker in ODI history, came over the wicket and perhaps hurled the ball of the summer. Pitching on middle and off, the ball hissed past Meg’s bat and took her defence apart. Australia were 9 for 2 in 4.5 overs. In a few minutes, Nicole Bolton was in the pavilion as well.

Ellyse Perry, the second threat, gave India a scare. She added 38, and Villani was at her mightiest. She blasted 75 off 58 balls. However, once they fell, Australia almost ran out of the contest.

Blackwell did her bit and went the extra mile. When Australia lost 9 wickets, she made sure she takes most strike. That was the only way out. She single-handedly reduced the Indians to nothingness and inched Australia closer to an improbable, but Deepti knocked as well Australia out of the campaign.

Player of the Match: Harmanpreet Kaur. 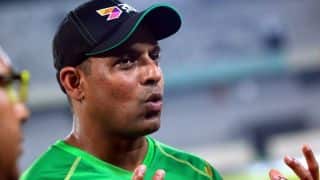 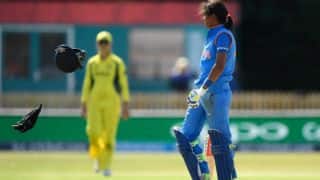