Harmanpreet Kaur grabbed for 4 for 27 and then hit a quickfire unbeaten 30 off 21 balls to win the 'Player of the Match' award in his second appearance.

Albury: Harmanpreet Kaur’s maiden season in the Women’s Big Bash League (WBBL) is turning from good to great as the India’s T20 captain produced an all-round performance to help her team Sydney Thunders win by eight wickets against Melbourne Stars. After smashing an unbeaten 47 off 28 balls albeit in a losing cause on her WBBL debut, Harmanpreet grabbed for 4 for 27 and then hit a quickfire unbeaten 30 off 21 balls to win the ‘Player of the Match’ award in his second appearance. Southern Stars legend Meg Lanning leading the Melbourne franchise opted to bat bit could score only 116 for 9 in 20 overs.

Coming into bowl his gentle medium pacers as the fourth change bowler, Harmanpreet first removed Jess Cameron (36) in the 16th over and in the 18th removed Lily Bardsley (2) and Katie Mack (0) and then removed Danielle Hazelle (5) in the final over. It was her bowling at the death that did not let the Melbourne Stars coast to a big total.

Even Australia’s former captain could not stop admiring Harmanpreet’s brilliance on her debut WBBL match and tweeted:

Seriously impressed with @ImHarmanpreet in last nights #WBBL02 Classy, skillful. A wonderful addition to the tournament.

The target of 117 was achieved in 18.5 overs with Harmanpreet coming in at No 4 with 39 runs still needed off 39 balls. Harmanpreet scored 24 runs in boundaries off seven scoring strokes with three fours and two sixes in company of another Australia international and Sydney skipper Alex Blackwell (21 no). In Harmanpreet’s debut match, she stunned the opposite side which was also against Melbourne Stars. 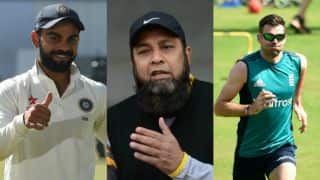