Where the men failed, India is hoping its female cricketers can blaze to glory when they face England in the World Cup final on Sunday. Images of captain Mithali Raj and star batswoman Harmanpreet Kaur adorned the front pages and the team was hailed on social media after India stunned defending champions Australia in Thursday’s semi-finals. Kaur hit an unbeaten 171 to propel India into the final at Lord’s, England’s spiritual home. The win comes as a welcome boost with India in need of cricket cheer after the men’s team capitulated to Pakistan in the Champions Trophy final last month. READ: Harmanpreet Kaur’s 171* knocks Australia out

The performance came as no surprise to former players who believe Indian women’s team is destined for the big time. “Hats off to Harmanpreet. It’s a great victory for the India women’s cricket team and for women’s cricket in India,” former team captain Diana Eduljee told NDTV.

“I thank the girls for the opportunity they have given to all women cricketers and the future of women’s cricket is now here to stay in India. I am sure this victory is going to be historic as we have already beaten New Zealand, Australia and England. I’d think the World Cup is already in India irrespective of whatever happens on Sunday,” added Eduljee.

Kapil Dev, who won the World Cup with the men’s team, said he was “filled with pride” after seeing the women in action against the Aussies.

Kaur, who last year became the first Indian woman to play in the women’s Big Bash League in Australia, grabbed the limelight with a 115-ball innings laced with 20 fours and 7 sixes.

Unanimously described as an “unforgettable knock” by one and all on social media, Kaur’s efforts saw India enter their second final of the women’s World Cup after they were beaten by Australia at Centurion in 2005.

“This is a genuinely Kapil-Dev-at-Tunbridge-Wells kind of innings,” leading Indian commentator Harsha Bhogle tweeted, comparing it to Dev’s 175 against Zimbabwe in a 1983 World Cup league match. “Hope it inspires other young girls to follow.”

ESPNcricinfo senior editor Sharda Ugra termed the win as a “turning point” in Indian women’s cricket, but said the team and Kaur’s performance did not come as a surprise.

“We knew that there is a new generation of young players who play it like a modern game,” he told AFP.

“They are physical, they field well, are aggressive. They are like 21st century kind of women. I think it was this particular innings and this particular game that will prove to be the turning point of Indian women’s cricket.”

Indian women’s were always a force to reckon in the 11th edition of the women’s World Cup with Raj leading from the front as the tournament’s second highest run-getter.

Raj, 34, became the first batswoman to score 6,000 runs in one-day internationals in the league game against Australia, surpassing the record previously held by England’s Charlotte Edwards (5992).

“She has been a very big influence in the sense of her presence and the fact she is such a big figure in the women’s game,” Ugra said of Raj, who averages over 50 in 185 ODIs and 10 Tests.

“She has sort of set a standard in excellence that everyone should aspire for.” 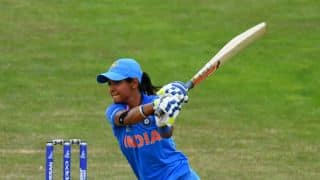