Harmeet Singh geared up to play for KXIP in IPL 5

Harmeet Singh geared up to play for KXIP in IPL 5

It's sweet 'homecoming' for medium-pacer Harmeet Singh, who will turn out for Kings XI Punjab in the fifth edition of Indian Premier League after having a three-year stint with Deccan Chargers. 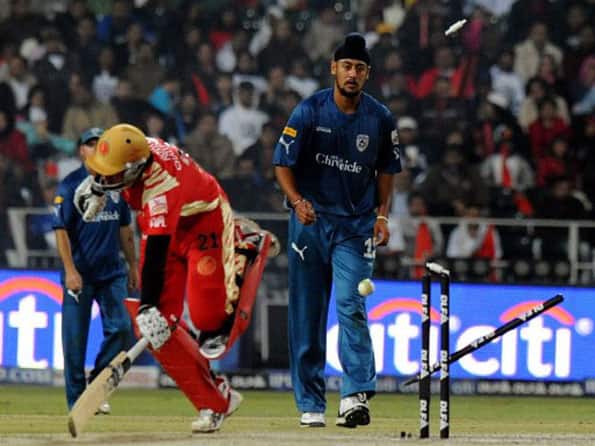 Harmeet Singh played two games for the Deccan Chargers in 2011, picking up three wickets at an economy rate of 7.57 AFP

It’s sweet ‘homecoming’ for medium-pacer Harmeet Singh, who will turn out for Kings XI Punjab in the fifth edition of Indian Premier League after having a three-year stint with Deccan Chargers.

The 24-year-old Harmeet, who was moved from Chargers to Kings XI during this year’s transfer window after the players’ auction, said he is “excited” to be part of the franchise, owned by Bollywood actress Preity Zinta and leading industrialist Ness Wadia.

Harmeet played two games for the Chargers in 2011, picking up three wickets at an economy rate of 7.57. He had played only two List A matches when Chargers picked him for their campaign in IPL 2009. He played his last Twenty20 match against Chennai Super Kings on May 1, 2011 at Chennai.

The medium-pacer said that whatever he has achieved today as a cricketer is just because of his experience with the Chargers.

“I learnt a lot while playing for Chargers. Whatever Harmeet Singh is today, it’s just because of Chargers. They made me what I am today by providing me the platform like IPL.

Chargers taught me how to a handle pressure situations in competitive cricket,” he said.

Asked how he plans to ply his trade with his new employers and under legendary Australian stumper-batsman Adam Gilchrist, Harmeet said, “When I was playing for Chargers, Adam Gilchrist was my captain and here also in Kings XI, he is my captain. He knows everything about me…my weaknesses and strengths. I am looking forward to see how he uses me against opponents.”

Like any other budding cricketer, Harmeet also nurtures the desire of donning the national colours.

“My dream is to play for India. I am all geared up to give my 100 per cent in the fifth edition of the league and catch the attention of national selectors.”

Asked about Kings XI Punjab’s chances this season, Harmeet said: “I am confident that we will qualify this time and win the tournament.”

He also wished Indian cricketer Yuvraj Singh speedy recovery, who is undergoing chemotherapy in the Unites States for the malignant tumour between his two lungs.

“I wish him speedy recovery. Get well soon and hit the field again. We are all looking forward to you to play for the country again,” he said.