Virat Kohli was nine runs short of his maiden century as India defied Australia in the afternoon session of the third day of the final Test at Adelaide Oval. 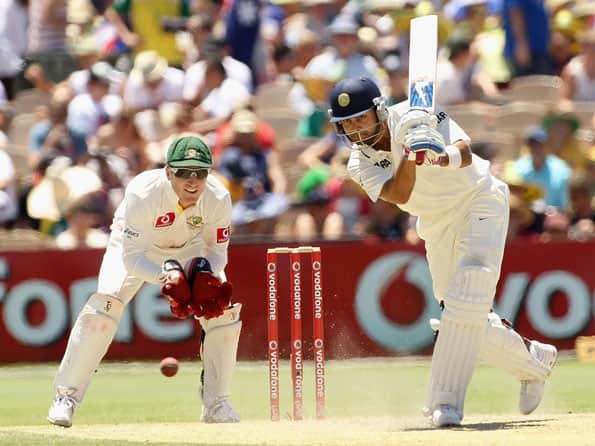 Virat Kohli was nine runs short of his maiden century as India defied Australia in the afternoon session of the third day of the final Test at Adelaide Oval.

The talented Kohli was batting on 91 and had put on 114 runs for the sixth wicket with Wriddhiman Saha (35) who was cleaned up by Ryan Harris t the stroke of tea.

Australia put its best bowlers infront in the second session as it looked to make further inroads into India’s score of 122 for 5 at lunch.

Both Kohli and Saha showed admirable guts in playing balls on merit, never flinching in face of a short delivery and rarely drawing into an indiscreet shot on their off-stump.

Kohli was assertive against Australian pacemen and hit all of them?Ryan Harris, Peter Siddle and Ben Hilfenhaus for at least a boundary each?to stamp his authority.

He played some lovely drives through the on-side and there were firm strokes of the backfoot too as he blunted the home team pacemen.

Kohli’s half century came when he flicked Hilfenhaus for a boundary bisecting the two fielders stationed at the mid-wicket region. His 50 came off 100 balls with five hits to the fence.

As the time for the new ball neared, Australia resorted to double-spin attack and it only hastened the scoring rate for the Indians.

In contrast to his dour batting, Saha slog-swept Nathan Lyon over midwicket for a massive six. Kohli was even more aggressive against Clarke as he twice pulled him for a four and a six in one over.

Another exquisite cover drive off Lyon took Kohli on level with his highest score in Test cricket? 75, he scored at WACA, Perth in the third Test.

The century partnership for the sixth wicket came when Kohli square cut Clarke for a single. Kohli also flicked Clarke for a couple towards midwicket region, it took his score to 84?the highest innings played by an Indian on this tour, better than 83 by Gautam Gambhir in Sydney.

Saha too appeared to be picking threads from the other end and was unbeaten on 32, to Kohli’s 87 at the total 220 for 5 when the second new ball was claimed by Australia, 20 minutes before tea break.

Just before the tea break, after four nothing overs with the new ball, Harris made the breakthrough for Australia when he got Saha out. The wicketkeeper-batsman shouldered arms to an incoming delivery which didn’t go over the stumps?instead it rattled the timber to signal the end of young gritty cricketer’s innings.

Saha for 137 minutes and faced 94 balls, hitting a four and a six. Kohli has so far batted for 186 minutes and hit seven fours and a six from 182 balls. This is already his best score in Tests. (PTI)