Dropping a bombshell, former Sri Lanka skipper Hashan Tillakaratne has claimed that match-fixing is common in his country since 1992 and promised to reveal names of those involved, soon. 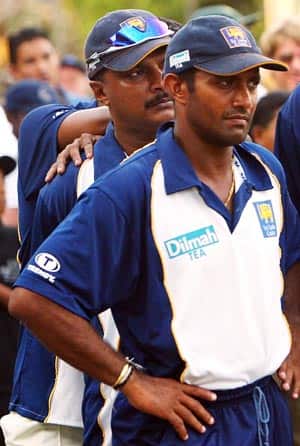 Dropping a bombshell, former Sri Lanka skipper Hashan Tillakaratne has claimed that match-fixing is common in his country since 1992 and promised to reveal names of those involved, soon.

Tillakaratne, who played 83 Tests and 200 ODIs for Sri Lanka, made the sensational claim while appearing in a TV show. “I can tell this in agreement with my conscience. Match fixing is not something that started happening yesterday or today. According to my knowledge, it happened since 1992. I say this with great responsibility,” Tillakaratne said.

Tillakaratne, who was Sri Lanka’s captain between April 2003 and March 2004, said people involved in the menace have been successful in burying the issue with money power but promised to expose them soon.

“There were threats of this issue being exposed during various times. But it was pushed down by giving money to various people. If the people who were responsible for that are listening to this, I state this today with great responsibility, I will shortly reveal the names of those responsible,” he said.

Tillakaratne, who led the side in 10 Tests during his tenure as captain, stopped short of calling the World Cup final between India and Sri Lanka a fixed match but had some reservations about selection.

“I am not saying that this match (The world cup final) was fixed. But anyway match fixing is something which has been in this country over a period of time. This has spread like a cancer today,” he said.

“Why were four players changed for this match? Those are questions that should be asked. Arjuna (Ranatunga) spoke about this, we who have played cricket talk about this. We were playing an entirely different side.

“Why was Mendis removed to put another spinner, Kapugedara was never among runs but he was chosen to replace Chamara Silva. It is not fair, is it?” a report in the Daily Mirror quoted him as saying.

The former Lankan skipper also doubted the timing of the selection of the World Cup squad. “The world cup team was selected on the (January) 7th. I questioned at a TV show why this team was picked on the day before the IPL auction. The IPL auction was on the (January) 8th. Then it was said that we have time when we pick the team before the IPL auction and it was said that we have enough time as there were ten more days. Those were the excuses given.

“Also at the provincial tournament on the (January) 11th, 12th and 13th, we had the quarter-finals, semi-finals and the finals. If Sri Lanka Cricket conducted a tournament, we could have watched those tournaments and picked the team two or three days later. If that happened, I believe another two or three players could have replaced some of the players. I had my doubts whether it was the best team that was picked.

“In this country, there is a side which you don’t know but I know. We discussed this. Inquire into this. Anyone can investigate this. Why was the team picked before the IPL?” he asked?.

Tillakaratne said it was a vicious circle and the way things are moving, Sri Lanka would soon surpass Pakistan in terms of fixing.

“This has been happening since 1992 and I know all the people who are connected to it. I say this with responsibility. It is just like a relay. I run my lap and hand over the baton to you, you complete your lap and give it to another. This is a network. No one can ever go out of it and no one can come into it.

“This situation was always there. When it came out from time to time, it was quietly swept under the carpet. If someone doesn’t intervene and stop this menace, within another two-three years in this country, with these politics, with these corrupt administrators, I believe this country won’t be second to Pakistan in the near future,” he said.