Moments before his partner, Rilee Rossouw reached his second ODI.

Hashim Amla reached his 19th ODI century off 92 balls. Amla played some remarkable shots and played calculated innings. South Africa are in a dominating position in this ODI as they cruising towards a mammoth target. Moments before his partner, Rilee Rossouw reached his second ODI ton just off 83 balls. Both these batsmen also completed their 150-run partnership.

Earlier, Hashim Amla continued his glorious form and smacked his 28th One-Day International (ODI) half-century off 49 balls in the fifth ODI played against West Indies at Centurion. He played with all calm and hit some classic strokes in his innings. South Africa are placed well in this 42-over encounter. Faf du Plessis was the the second South Africa wicket to fall as he was dismissed by Andre Russell . West Indies captain Jason Holder bowled well in the early overs and also managed to get the prized wicket of Quinton de Kock who couldn’t make much impression on his return from injury.

The play was earlier delayed due to rain. After the rain stopped, West Indies won the toss and elected to bowl first in a match that was reduced 42-overs per side. Amla is leading the South African team in this ODI. 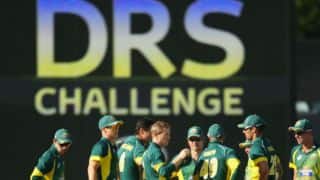