"You just have to have a desire to play Test cricket and to play for the Proteas, which is an absolute honour,

Johannesburg [South Africa](ANI): Veteran South African batsman Hashim Amla, who recently became the eighth South African to appear in 100 Test matches, believes he is not the last country s player to reach the milestone and that there are much more to come in the near future. Amla made a return out of his poor run of form in grand style by scoring 132 during the opening day of his side s third Test against Sri Lanka in Johannesburg, which also marked his 100th Test. With the milestone, he joined Jacques Kallis, Graeme Smith, AB de Villiers, Mark Boucher, Gary Kirsten, Makhaya Ntini and Shaun Pollock in the list of South African 100 club . Following the feat, Amla said anyone who has a desire to play Test cricket could easily reach the three-figure milestone.

Whoever wants to play Test cricket and they re good enough, they ll get to 100 Test matches. You just have to have a desire to play Test cricket and to play for the Proteas, which is an absolute honour, Sport24 quoted Amla as saying. In the build-up of this Test, South Africa skipper Faf du Plessis had surprisingly made what he described as a big call when he predicted that Amla would be the last South African player to play 100th Test match.

Disagreeing with his statement, Amla cited intense schedules and shorter playing careers as the reasons behind du Plessis statement. Faf has made that call, I think, because of scheduling and if guys are involved in other tournaments around the world fatigue etc. but Test cricket for me has always been the pinnacle. So if somebody else has that type of vision there is no doubt that there will be some youngster in our team who is going to get there, he said.

South African pace spearhead Dale Steyn currently has 85 Tests to his name, but he is only expected to make a return in July following a shoulder surgery. 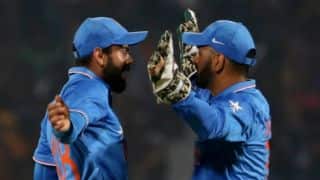