Resuming at 193 for 2 after tea, Hashim Amla, who had a quiet day till then, upped the ante. Those glorious drives were punctuated by fluid wristwork, sending the ball past square-leg.

Angelo Mathews must have been smiling when he heard his South African counterpart Faf du Plessis utter bat after winning the toss. The morning was overcast. The conditions were conducive. Sri Lanka got both South African openers Stephen Cook and Dean Elgar in consecutive overs. They had a reason to have their tails up. Hashim Amla, man of the moment, seized Day One of his 100th Test, living up to his moniker of The Mighty Hash once again. Amla became the eighth cricketer and second South African after Graeme Smith to score a hundred in his 100th Test. The teams took stumps at 338 for 3.

Beyond the Amla hype, the player of the day was JP Duminy, whose counterattack pushed Sri Lanka to the back-foot and let Amla come to his own. Amla was happy playing second fiddle to Duminy, who was watching the ball very well and timing it to perfection. Losing two wickets for 45, the duo went on to add 292 for the third wicket, South Africa s highest partnership for any wicket against Sri Lanka in Test cricket.

Resuming at 193 for 2 after tea, Amla, who had a quiet day till then, upped the ante. Those glorious drives were punctuated by fluid wristwork, sending the ball past square-leg. South Africa were in a strong position, which Amla to play more freely. Meanwhile, Duminy brought up his sixth Test hundred with a thick edge off Nuwan Pradeep raced past the slip cordon.

Almost an hour later, Amla became the seventh man to get a hundred in his hundredth Test when he used his feet to loft Rangana Herath down the ground. This was Amla s first fifty-plus score since August 2016 and first hundred in a year.

He was on 6 from 41 balls when surviving every ball looked a task. When he cut for a boundary the crowd breathed a sigh of relief instead of acknowledging the elegance of the shot. Amla s vigil got stronger but the footwork improved as the clock ticked on. He drove Herath confidently, both off front and back foot.

Had Dhananjaya de Silva not dropped the regulation gully catch at the stroke of lunch, the script could have been different for Sri Lanka, who had started well on the lively pitch. Amla was on a mere 5 at that point.

Duminy, on the other hand, middled the ball more frequently. This was not his highest Test score, but certainly the most fluent one. The straight drives in the first session, the cover-drives and the short-arm pulls in the second and the nimble use of feet to Herath in the final were all treats to watch.

Mathews had two slips and a gully, but Duminy still had the courage to pierce the gap with a gorgeous late-cut to the third-man femce to bring up his 150. Celebrations and perhaps a lapse in concentration saw Duminy falling in the penultimate over of the day. He nicked Kusal Mendis to the first slip. Debutant Duanne Olivier walked out as the night-watchman and survived four balls.

Duminy has justified his worth as South Africa s No. 4. He will probably slip to 5 once AB de Villiers returns. They will be a better-oiled side in their march to the No. 1 Test side again.

Earlier, the in-form Elgar and Cook had fallen in the first session when the Sri Lankan bowlers were making the ball talk and extracting extra bounce of the surface. 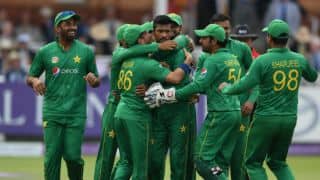 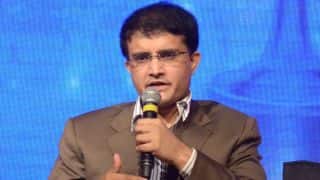