Hashim Amla and Rilee Rossouw went blitzkrieg as they managed to lift South Africa to a total of 361 for five in the stipulated 42 overs in 5th One-Day International (ODI) at Centurion.

The 247-run partnership between Rossouw and Amla was also the second highest partnership for third wicket in the history of ODI cricket. It was raining boundaries and sixes at Centurion as the spectators got some good catching practice. West Indies bowlers bowled awkward lines and length.A total of 17 sixes were hit by the South African batsmen in the alloted 42 overs.

West Indies were successful early in the innings as they got the the breakthrough of Quinton de Kock only in the second over of the innings by Jason Holder. Faf du Plessis came in at No.3 had a short stay at the crease as he was dismissed by Andre Russell when tried to play a hook short. Du Plessis was just 53 runs away from the 2,000 ODI runs landmark but could only add 16 runs before he walked back to the crease.

Rilee Rossouw was sent back to bat at No.4 and a different role to play. Amla and Rossouw partnered together and started adding runs. Amla was on attacking mode until he got his 28th ODI fifty. Rossouw followed him as he also got to his half-century. Rossouw adopted a slightly different method after he completed his fifty as he went all bounty and hit some extraordinary shots. The batting powerplay was taken from the 27th over and both the batsmen managed to juice out 53 runs from four powerplay overs. The 30th over bowled by Russell gave away 28 runs.

After the dismissal of Rossouw and Amla cameos from David Miller and JP Duminy allowed South Africa to put up a record score by a team batting 42 or less overs. 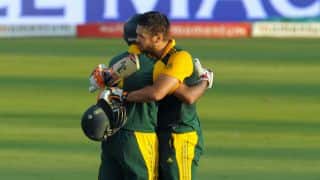