He equalled Herschelle Gibbs to be the joint-highest South African century-maker in ODIs.

Hashim Amla, the South Africa opener, has scored a smartly managed century to lay a base for a competitive team total against New Zealand in the first One-Day International (ODI) in Centurion. This was is 21st ODI ton, the joint-highest for a South African in the format. Alongside Rilee Rossouw, he gathered 185 runs in 33.1 overs, hitting the occasional boundary amid a cautious approach. He has hit three sixes and ten fours in his nicely paced knock, serving as the base pillar around which the innings revolved. LIVE BLOG: South Africa vs New Zealand, 1st ODI, Centurion

His boundaries have arrived intermittently as the innings has progressed, and more increasingly so as the death overs arrived. He has hit three fours each against fast bowlers Mitchell McClenaghan and Jimmy Neesham, as their pace helped him be comfortable on a slowing pitch. The sixes were scored in the early overs against McClenaghan, and off-spinner Nathan McCullum.

The feet were used well against spinners in the middle overs. Rossouw, on the other end, seemed more scratchy, but gained confidence as he spent more time in the middle. Eventually, the stand gained momentum, and by the end of it, a run-rate of 5.57 had been generated. LIVE CRICKET SCORECARD: South Africa vs New Zealand, 1st ODI, Centurion

Amla was dismissed in the 46th over for a well-made 124. His knock has given his team the chance to score 300. 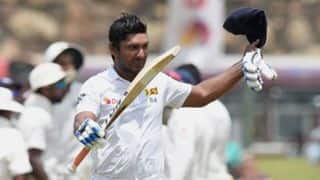