Hashim Amla took to Twitter to thank all his fans for the support and the messages after he took everyone by surprise when he resigned from Test captaincy following South Africa’s draw against England in the second Test at Cape Town. Amla ended his struggle with the bat, scoring 201 in the first innings of the Test, which help his side get close to England’s massive total of 629 for 6. Amla’s reign as captain saw the Proteas lose their first away series in nine years, when they were thrashed 3-0 by India recently. In his 14 matches as skipper, Amla managed tot guide South Africa to four wins, four losses and six draws. FULL CRICKET SCORECARD: South Africa vs England 2015-16, 2nd Test at Cape Town

AB de Villiers will take charge of the Test, at least for the remaining two Tests against England. De Villiers is also the captain of South Africa’s One-Day International (ODI) side. De Villiers was given the responsibility of keeping wickets in the first Test. But that burden has been lifted from him as Quinton de Kock was included in the second Test. De Villiers has never captained South Africa in the longest format before — a role which many believed he should have taken up instead of Amla two years back. READ: Hashim Amla resigns as South Africa captain post second Test against England

Hey everyone . Thanks for all your messages and support. It means a lot.

According to a Cricket South Africa statement, Amla decided to step down before the second Test and told his teammates about the decision only at the end of the match. “I felt someone else could do a better job,” he told journalists, adding that he had been thinking about resigning for several weeks. 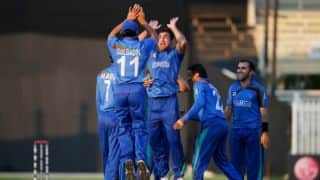