New Delhi: South Africa Test captain Hashim Amla refused to be drawn into controversy regarding Nagpur pitch being rated “poor” by ICC match referee Jeff Crowe and said that his team has moved on from the incident. “Whatever the ICC says, we leave it at that. Whatever has happened in Nagpur has happened. End of the story. We are looking forward to this match,” the soft-spoken Proteas captain made his point at the start of the media conference. While he has had a disastrous series, Amla said that their preparation did not justify the end result. FULL CRICKET SCORECARD: India vs South Africa 2015, 4th Test at Feroz Shah Kotla

“Preparation has been very good. I don’t think whatever happened in the last Test match will have an impact on the team. It was a difficult Test match for everybody. We have tried to prepare as best as possible on all areas. Unfortunately, the results have not justified it.” There was a roar of laughter when he answered the query on the Kotla track. “Had a look at it yesterday. Didn’t see it today as I came straight here [at the press conference]. Wicket can’t be changed overnight,” he smiled as there was a round of laughter. Virat Kohli nostalgic to lead India at home ground in Delhi vs South Africa in 4th Test

Questions were asked as to why he brought Imran Tahir late into the attack as the Pakistan-born bowler still managed to get a five-wicket haul. “We got bowled out for 79 and were like 140 runs behind. The reason I use Imran late is because my experience with him tells me that he does have a tendency of leaking runs. Although he picks up a wicket here and there. I went with my gut feeling.” Virat Kohli: Changes depend on conditions, not on winning or losing

For Amla, playing on these treacherous tracks has been a challenging experience. “Very exciting. Lovely challenge facing good bowlers on difficult tracks. These are the type of wickets where you never quite get set. You can scratch around to get some runs. Lot of young guys will have experience of playing on these tracks,” Amla said. For Amla, winning the Delhi Test is important because England series is two weeks away. “Very important to get back to winning ways ahead of England series in two weeks’ time. There are no freebies in Test cricket and important to make it 1-2.” 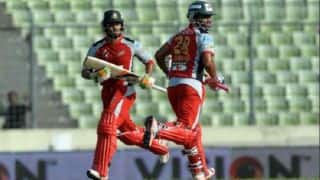